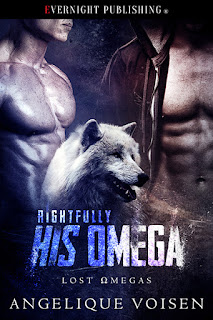 As a rare omega, Charlie has experienced and tasted hell’s finest. At twelve, Charlie watched his home burn down and his pack become extinct. He also lost his fated mate, Caleb. Ten years later, Caleb returns, intending to claim what he lost.

Werewolves mate for life, and Caleb’s bond to Charlie is unbreakable, stronger than any marriage bond. Harder, scarred, and a reputed killer, Caleb is the kind of dominant werewolf who doesn’t understand the word no. But Caleb isn’t the only one who’s changed. Charlie’s all grown up now. If Caleb thinks Charlie’s going to bend before he breaks, then Caleb has another thing coming.

This is a previously published work. It has been revised and edited for Evernight Publishing.

Caleb lowered his head and caught one glinting piece of metal between his teeth. He tugged, not slowing down his fist around Charlie’s length.

“You cheat,” Charlie hissed. Then Caleb heard his shuddering sigh.

Caleb released his nipple ring and nosed his way back to Charlie’s neck to whisper against his ear, “Come all over my fingers. Now.”

The word ‘now’ instantly triggered Charlie’s climax, and fuck, Caleb wouldn’t deny what a rush it was, holding the power to give and deny his mate. Charlie dug his fingers into his shoulder, nails creating crescent half marks to hold on to him. His eyelids fluttered, and the hate there evaporated into bliss and content. Although Caleb had been attracted to Charlie’s bite and sass, Charlie looking like this was fucking picture perfect.

Charlie sank his teeth on the curve of Caleb’s shoulder, hard enough to bruise, but not draw blood. They weren’t ready for an intense mating mark experience anyway, but Caleb couldn’t wish away the disappointment. Coming back to reality, Charlie blinked. His jaw tightened, and he began where he left off, pumping Caleb’s cock with ferocity until Caleb let out an answering growl and spilled his load all over Charlie’s hand.

“Prick,” Charlie whispered against his chest, although Caleb could detect a note of fondness there. His hand grew limp, Caleb felt him about to get off his lap, but he pressed a hand against the back of Charlie’s neck.

His words worked. Charlie melted against him, wrapping his arms around his large frame, reminding Caleb of a small ball of warmth. They remained locked against each other like that. Time became irrelevant, but the years of frustration and anger still remained. At least the big explosion was done. Caleb could work with tiny ones.

Caleb grew still as Charlie pressed his lips against his neck. Charlie licked at the flesh there, tongue drawing tiny and teasing circles. Was Charlie tormenting Caleb with what he’d never give away? That he’d never accept Caleb’s mating mark because that would bind them for eternity, or at least until death? Would Charlie fight against what fate intended despite the battle being an uphill task?

Charlie drew back so Caleb could see the expression on his face. He instantly distrusted the small smile curving at the corner of Charlie’s lips, like he was harboring a private little secret no one else knew.