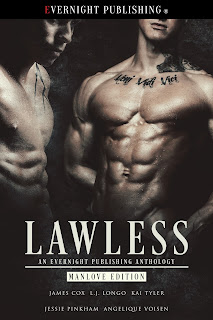 
Meet the hardcore heroes of LAWLESS! They’re fearless, dangerous, big on revenge, and defiantly walk on the wrong side of the law. Although their morals may be compromised, their loyalty to that one man is never in question.

Our five hand-picked novellas are dark, dirty, and will make you see bad boys in a whole new light. From bikers to hitmen, these dangerous men won’t be satisfied until they have everything they came for—until they have him.

Monsters by James Cox
Sunshine and Snakes by L.J. Longo
Live or Die by Kai Tyler
$250,000 Love by Jessie Pinkham 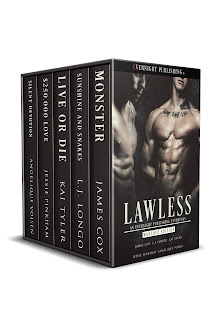 “I want to get well,” Sal ventured, looked at his plate. Silent didn’t like that. He tipped Sal’s chin. Wary eyes met his. “I’m second-hand goods, you know?”
A feral growl rumbled out of his chest, made Sal widen his eyes in surprise.
“Don’t fucking ever say that again.”
Sal frowned. “Are you saying there’s nothing wrong with me? Don’t lie.”
Silent let out a frustrated breath. He anticipated Sal developing self-esteem issues during his time in captivity, but he hadn’t realized it might be hard to erase those silly notions out of Sal’s head.
“I want you. All of you.” Silent let Sal see the hunger in his eyes, one emotion he kept in check for fear for scaring off the only man that mattered. “Strip away this veneer of civility and you’d find a beast. All I want to do is ravish you on this table.”
Sal stared at him, fear and wonder in his eyes. “You mean that.”
Silent gritted his teeth in assent, shoveled more food into his mouth. Of course he’d remain celibate if Sal never accepted him to bed. The frustration would continue to brew inside him, like a storm waiting to be unleashed, but he’d wait.
“Every word.”
“But you’ve been careful,” Sal eventually said. “Never once took advantage where other men would.”
“I’ll never force you to do anything you don’t want. Your choices are your own.”
Sal reached across the table, closed his small hand over his. Silent had noticed Sal’s fingers during his retrieval, knew how they’d gotten that way. Old anger simmered inside him even though the fucker Dom Sabella rotted in an unmarked grave along with the men who took similar pleasure in hurting Sal. Dom died too soon. Silent hadn’t the chance to get as creative as he wished, his longing to see Sal more important.
“I choose you,” Sal simply said, daring to meet his gaze.
“Think carefully.” Silent flipped Sal’s hand over, spreading out Sal’s palm flat on the table, tracing each line on Sal’s hand with one callused finger. Sal shivered when he moved it lower, to trace Sal’s pulse point. “Once you agree to be mine, there’s no going back. You’ll be bound forever to a monster.”
“You’re not a monster, not to me.” The sudden vehemence in Sal’s voice and those blazing eyes stunned him for a second.
Sal might not understand fully, not yet, that by tying himself to Silent, he’d be dooming himself, but it didn’t matter. Sal could still have a normal life if he wished, travel to wherever he wanted and be whoever he wanted. Silent would provide whatever resources Sal needed, watch in the shadows, never taking his eye off his target.
Too bad Silent was one selfish bastard. No material possession interested him, no other person ever held his interest for so long. It had always been Sal.
“Be certain of what you want.”