New Release: Worth the Price 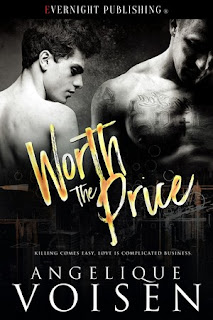 Lex Page is heart sick and prefers a life of solitude. He agrees to blind dates but is relieved when he’s stood up. Meeting an enigmatic stranger changes his life forever.

Lex’s instincts tells him Frank Wolfe is a predator in human skin, but he has trouble staying away. When he stumbles on Frank in the middle of a kill, Lex is given a choice—die or become Frank’s captive.

Contract killer Frank knows the rules of the people he works for—leave no witnesses alive, except he can’t bring himself to eliminate Lex. Killing comes easy to Frank, love is complicated business. When his enemies close in, Frank has to make a choice—let Lex go or drag Lex down to the darkness with him.

“Is your car nearby?”

“Then let me drive you home. The streets aren’t safe around this time of the night.” Lex began to refuse, but Frank held open the nearest car door of a black Mercedes-Benz. When did Frank move?

Lex slid in, nervous as Frank took the driver’s seat and started the engine.

“Don’t worry,” Frank said. “I’m not some kind of serial killer, if that’s what you’re worried about. I promise all I want to do is drive you home. Deal?”

“I don’t think that,” Lex said quickly. “Sorry. You’ve been nothing but an amazing date tonight. I’m just paranoid by nature.”

“It never hurts to be careful.” Frank started the engine.

Lex blurted out his address to reassure Frank he wasn’t that scared of him.

“Aren’t you afraid your car will get stolen?” Oh, bloody hell. Lex seemed on a roll to make the evening worse. Instead of looking annoyed, Frank appeared amused by his question.

“Not at all, most people are wise enough not to commit such a foolish mistake.”

Unsettled, Lex stared out the windows. Most of the denizens of the night had come out to play. Frank was right. This late, the streets weren’t entirely safe and police patrol cars were nowhere to be seen. Frank’s answer sounded like a threat, but he had a feeling a man like Frank wasn’t kidding around. It was a short drive back to his neighborhood, but he couldn’t stand the silence.

“Are you part of the local mafia?”

Another laugh, deep and dangerous, slipped out of the Frank’s throat. “Close enough, I suppose. Terrified?”

Was that supposed to be a joke? Frank’s expression might look the same, but he could sense something else. The mood in the car shifted. The tension rocketed. Lex shook his head. “I haven’t crossed your bad side, right? Sorry. Forget I asked.”

“A wise decision. People who get too close to me…” Frank trailed off. “Ah, here we are.”

Relieved to see his familiar neighborhood, Lex unbuckled his seat belt. Frank touched his hand and gave it a squeeze.

“Do you believe in lucky accidents, Lex?”

“I don’t know,” Lex muttered, flustered. Frank’s hand on his felt so warm, inviting. Maybe this was what it felt like, when a predator lured his prey into his den, the prey being unaware of his surroundings. Oh, great. Lex’s imagination was getting the better of him.

Goodbye. Not good night. Unsettled, Lex tugged his hand back, about to reach for the car door. Oh, screw this. If this was really farewell, he should break out of character, do something daring. Lex turned, leaned over, and snuck a kiss on Frank’s mouth.

Okay. Wow. That had felt like a rush. Lex never did anything like that before. Now to make a quick exit before Frank realized what happened. Too late. Frank closed a hand over his wrist, his grip bruising and his eyes unreadable.

“Do you think you can get away with something like that?”

“You don’t sound the least bit apologetic.” Frank tugged him close. Lex ended up back where he started. Their noses touched, so did their foreheads. Frank’s gaze took on an almost feral look. Releasing his wrist, Frank’s hand moved to the back of his neck and pulled him for a proper and serious kiss.

My God. What a kiss. Frank’s mouth descended on his, all hunger and ferocity, demanding a response for him. Insides turning to jelly, Lex kissed back. Tongues and teeth tangled. Lex yielded, opening his mouth wide so Frank could deepen the kiss.

Too lost in the amazing sensation, Lex didn’t realize Frank other hand managed to work the button of his jeans, unzipping him. Frank pushed a hand past his trousers and curled it around his dick.

Lex pulled his mouth away, panting. “W-what are you doing?”

“You aren’t telling me the right words, Lex. Tell me to stop and I will,” Frank said simply.