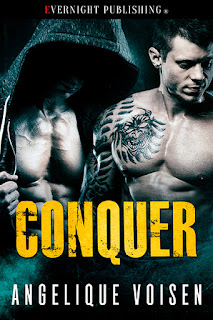 Most people fear the dark. Some embrace it. Blackened windows, a 400-square feet self-made prison, and a loyal Welsh corgi—that’s the extent of former soldier Matthew Ash’s world. Matt’s tasted hell’s battlefield. He wears the scars on his skin and soul to prove it. Matt’s agoraphobia keeps his demons out and that’s all that matters.

Burnt-out MMA fighter Will Grove is having the worst year of his life. His boyfriend just broke up with him and he lost the fight of the decade. Will moves into a new town, seeking a fresh start. Everyone tells him to watch for the crazy recluse, but Will makes his own rules. One glimpse is all Will needs to recognize a man whose mind is fucked-up as his own.

Matt’s certain Will’s going to run. Will’s out to prove this is one fight he’s not going to lose.

*This is a previously published work. It has been revised and edited for Evernight Publishing.

Will’s lips twist to a bitter smile. “I’m not the only fucking coward here.”

I expect Will to walk away. Slam the door with such force the wood rattles on its hinges, but he closes the last few steps between us.

Move, I scream at my two feet, except every muscle in my body is frozen in place.

An inch or two separates our bodies. Breaths hitching, I don’t push or slap Will away when he reaches out to cup the back of my neck, the muscles in his inked arm bunching and cording.

Our bodies touch, and my skin feels unbelievably feverish. Like my fantasies of us kissing, Will fists fingers into my hair, except the pain is real. He forces me to look up, dares me to call his bluff, to gaze upon the intense animal-like hunger blazing in his eyes.

Only then does Will crush my lips with his and grinds his body against mine. Awake, my needy cock presses against the tight fabric of my jeans, and I feel Will’s own erection pressing against my body, begging to be free and taken care of.

The heat and taste of Will floods down my throat and erases any logical thought behind. I’ve never been kissed like this. Loneliness does things to people, even soldiers. It pushes us to seek other lost souls in the encampment.

We dispense with kisses and go for quick fumbles in the dark, but here in my prison, Will has all the time in the world. I lean against him, hungry to receive him. Will deepens the kiss, other hand banding around my waist, grip like iron.

He tugs my hair and releases my mouth. “Call me a fucking coward again. I dare you.”

Brain too scrambled to reply, a moan slips between my lips. I feel like a fumbling idiot, trying to find his way in the dark. Taking a deep breath, I manage words. “It’s been a fucking while for me.”

Will lets out a deep rumbling laugh, the sound waking me from what seems like a deep slumber. “Let me tell you a secret, Matt.”

I have plenty of things to say, but the fiend catches my bottom lip with his teeth. Bites hard enough to draw blood, but that incredibly turns me on. Sex with Will, I imagine, is exactly like this. Savage and wild, just the way I want it, need it. He licks away the droplet of blood and plants rough kisses down my jaw, slight bristles of his stubble rubbing against mine. Will nips at my earlobe.

“Don’t you know, baby? You were mine the moment you opened your door. Deep down you know it. Why keep fighting this, us?”
Labels: 2017, conquer, evernight publishing, mm, rerelease
Newer Post Older Post