New Release: Just the Way You Are (Determined Mates 1) 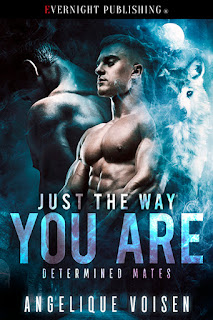 Werewolf Abel King is an accountant by day, average, slightly overweight and has zero ambitions of climbing the pack ladder. All that changes when his boyfriend breaks up with him. Deciding to man up, Abel enlists in a gym membership only to end up saving an Omega who recently moved in town. When Abel’s wolf tells him Tommy is his mate, he doesn’t know how to react.

Tommy is tired of moving from place to place. He and his brother have been hoping to find a permanent home in a new pack, except trouble comes in form of two wolves who think he’s fresh meat. Abel comes to his rescue and his wolf tells him Abel’s the one, but will Abel accept a deficient Omega as his mate?

Abel panted, stared down at the tempting offering beneath him. He could feel the press of Tommy’s hardening dick against him and his own, swelling with need. Tommy reached out, touching his unshaven cheek, about to drag his lower, but Abel growled, used one hand to keep Tommy’s wrists above his head.

Abel didn’t know where this new confidence came from, except he was starting to like his new, confident self. Tommy, too, felt the same way, because the Omega licked his lips in anticipation. The smell of their arousal was thick in the air, ambrosia he drank down eagerly.

“Okay,” Tommy whispered. “I like this new side of you.”

Abel kissed Tommy again, taking all of the Omega in. This time he didn’t rush. He took his time, tasting Tommy, licking, sucking, nipping. When he pulled back, Tommy parted his lips slightly, expression dazed.

“So good,” the Omega murmured.

A smile found its way to his lips. “We’ve just begun. Keep your hands above your head.”

Tommy nodded, an eager expression on his face. Abel had every intention of making his sweet Omega mewl for him, beg him for more. He layered kisses down the side of Tommy’s neck, fixating on a particular spot between shoulder and neck. Setting a bit of teeth there, Tommy shuddered, moaning.

He raised his head. “What exactly are you begging me for, Omega?”

His wolf rose to the surface, eager to take what this Omega offered so freely. If Abel placed his mate mark on Tommy, it would seal their bond. Tommy wearing his marks would tell the world Tommy was rightfully his alone. Abel snarled, his human and wolf half warring inside of him.