New Release: Canary for the Dragon 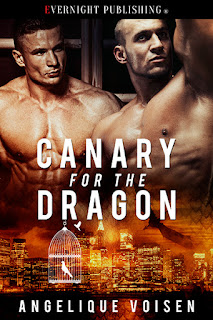 Sky’s a canary prince that’s been kept in a gilded cage all his life. As a breeder for his dying people, it’s his job to find a suitable mate and continue the bloodline. All he wants to experience is a one-night-stand with a stranger he’s attracted to, before someone puts a permanent lock on his cage.
Rex’s a century-old Alpha dragon shifter trying to make it past each day. Losing his mate tore his soul in half. As a result, his dragon’s broken beyond repair. When Rex meets Sky, he realizes he’s been given a second chance at love. But things are never that simple.
Sky’s powerful avian family wants their breeder back and Sky’s terrified for Rex. Little does Sky know who the real threat is. When a dragon finds his mate, the hunt never ends until the Alpha claims his mate.

Excerpt:
Sky shivered. Goosebumps appeared on the surface of his skin, but Sky’s dick bulged against his opened jeans. He fumbled for his bottoms, eager to take them off. Rex strode forward, assisted him in yanking them down, along with his boxers. Cool air caressed his lower
half.

“Look at you, little canary. So sexy and eager for me, hmm?” Rex stroked his inner thigh in small circles, making him shudder.

He silently wished Rex to move on to his dick, start pumping his shaft again.

Sky recalled he still had his shirt on, so he pulled that off.

“I like lovers with initiative,” Rex murmured, looking him up and down. Sky felt utterly exposed, vulnerable, and liked every second of it. It seemed appropriate he bare it all for Rex, body, heart and soul—even if Rex didn’t know it.

“You’ve had plenty of lovers then?” Sky bit his lip a second later, recalling Rex lost his mate. “I’m sorry. That was uncalled for.”

Rex shook his head. “It’s fine. You’re scared. You use sarcasm and humor to hide it.”

“This is my first time. I mean…” Sky paused, blushing hard. “I’m scared I’ll disappoint you.”

And he wanted to please Rex so much, Rex wouldn’t forget him easily.

God. He sounded like a brat, but being a virgin, he didn’t know what it was like, being at the complete mercy of another man but Rex was one in a million. Rex was worthy of his gift.

Rex blinked, some of the intensity in his gaze melting. “You’re a virgin?”

“Is that a problem?” Sky demanded, not wanting Rex to back off now. Taking a breath, he rose to his feet and said the words that came from his heart. “I want my first to be you, Rex.”

“First and last,” Rex whispered against his ear, sending a flutter through his heart.

“What does that mean?” Sky asked, his question left unanswered when Rex locked lips with his. 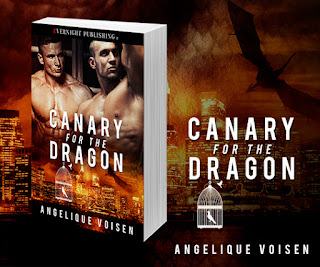