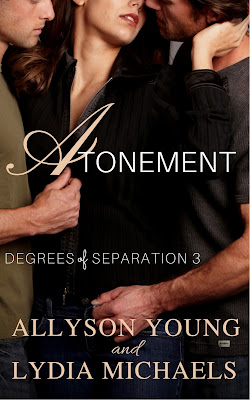 Beaten but not defeated, Austin faces his demons, encouraged by the return of his wife, December, and his best friend Cord’s constant presence. While accepting December’s feelings for Cord, Austin discovers some unprecedented emotions of his own… Pandora’s Box doesn’t close as easily as it opens.
Cord has kept a lifelong secret. But as his non-traditional love for Austin is exposed, he’s unprepared to trust his friends’ affection. Released from a self-imposed, emotional prison, he’s rewarded with both the man and woman of his dreams—yet he still harbors reservations.
December attempts to find a balance in her departure from conventional life and discovers new degrees of happiness intimacy in the non-traditional. With two men to love, her every need is met. But is she woman enough to satisfy their demanding hearts?
WARNING: This book contains subject matter suitable for mature reading audiences. Some content may be offensive to sensitive readers. Degrees of Separation is a MMF ménage trilogy with many emotionally graphic encounters and challenging situations that break the rules of traditional romance.

Cord shoved up from the bed and faced him. “Is it out of your system?”
“Is what out of my system?”
“Whatever you felt last night—and this morning.”
His mind halted at the fork in the road. Go right and everything went away, no therapy needed, no repeat performance. Turn left and… This time his mouth cooperated and the truth emerged. “No, it’s not out of my system.”
Cord drew back, surprise and something else written on his face. “Really?”
He dropped his gaze, unable to match Cord’s steady stare.
Although he commanded his household and ran several crews on the job, he couldn’t seem to out-master Cord when it came to this. This new dynamic between them he’d yet to name.
It wasn’t a simple step down from the top either. Every time he deferred to Cord it scraped and bruised, though maybe not as much as he might have thought. Sort of like a new pair of boots, uncomfortable at first, but with the promise of more support later.
Though he was still processing, he could at least confess he wasn’t giving up. “Really.”
His heart jogged into a gallop as Cord stepped closer, the soft press of his rough fingers on Austin’s chin made him flinch.
“Easy…”
Austin breathed through his nose as Cord leaned closer. How was he so natural about this? He held his breath as warm lips traced the stubble of his jaw. And damn his dick for firming up the second he breathed Cord in.
The heat of his friend’s body warmed him, his mind cataloguing every nuance. The wiry feel of another man’s chest hair. The sheer breadth and height of him. His earthy scent, so unlike Ember’s. His pure masculinity was suddenly alluring, when a day ago it was merely admirable.
Fuck.
His neck stiffened as Cord’s hand fit around his nape.
“It’s okay,” Cord whispered, leaning closer.
At the first brush of his lips, Austin panicked and made to jerk away but Cord’s steady gaze and strong grip calmed his instinct to flee. The heated press of his firm kiss slipped past his guard and Austin’s eyes drifted shut.
A dark, throbbing need took hold as he wrestled to deny how right it felt to taste another man. Not just any man. Cord. 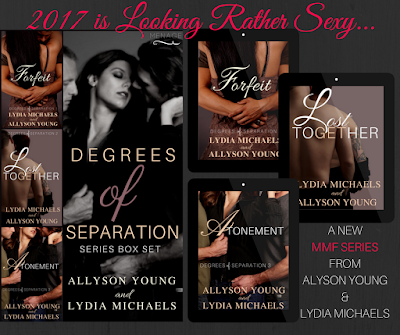 Lydia Michaels
Lydia Michaels is the award winning author of 30 romance novels. Her novels from the darkly compelling Surrender Trilogy were iBooks Bestsellers and her work has been featured in USA Today. In 2015 she was the winner of The Best of Bucks Award and she has been nominated as Best Author in the Happenings Magazine two years running [2015 & 2016]. She is a four time nominee for the prestigious RONE Award. Her books are intellectual, emotional, haunting, always centered around love.

Allyson Young
Allyson lives in cottage country, Manitoba, Canada with her husband of many years and numerous pets. She has written for many years and after reading an erotic romance, quite by mistake, decided to try her hand at penning one. A best selling Amazon author, she has now published three series and several stand alones in contemporary, sci fi, fantasy and suspense genres, as well as several novels under a different pen name. Allyson will write until whatever is inside is satisfied, until the heroes man up and the heroines get what they deserves. Love isn’t always sweet, and Allyson favours the darker side of romance.