New Release: Sub for the Lion 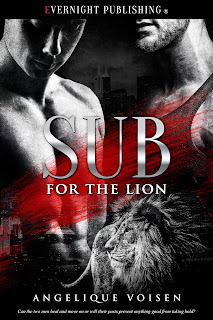 Can a broken lion and an ex-soldier fix each other?

Forty-year-old werelion Lance has retired from the lifestyle. When his mate and sub died, Lance thinks there’s nothing to live for…until he catches a glimpse of twenty-two year old Jax. When he sees the tattered soul behind Jax’s eyes, he unthinkingly agrees to do four domestic discipline sessions with Jax. As long as there are rules in place, Lance’s heart remains safe, or so he thinks.

Jax doesn’t understand his instant attraction to the werelion Dom. He’s frustrated by the rules Lance set in place. Four sessions, no strings attached—but what if Jax wants more? Old demons from the past continue to haunt him, but his time Lance helps him forget. Can the two men heal and move on or will their pasts prevent anything good from taking hold?

“Sir?” he whispers. This time, he says the word uncertainly.

I imagine taking those lips, wonder if Jax would yield to me or fight.

Fuck no. I’m better than this. Kissing seems so old-fashioned, so vanilla, and yet I want to taste Jax, feel the heat of his tempting lean body, crushed against my huge frame.

I brush my fingers over his bottom lip. The texture’s soft, slightly wet, perfect. Jax begins to lean into my touch. I should take a step back, let him in. Conduct the session. Late at night, when I’m alone again, then I can afford to wonder about what could have been.

A growl rumbles out of my chest. My lion doesn’t agree with that idea at all.

Then Jax says the wrong word, completely obliterating my resistance.

Fuck. How can I resist him any longer?

I shift my hand to the back of his neck, tug him close until our chest and groins brush. He rubs himself at me, like a cat in heat, denied so long of touch. I give him a punishing kiss, all roughness and bite, but that only triggers his response.

His hands are all over my body, and I let him explore. His touches are hesitant, inexperienced, as if he hasn’t been with plenty of guys. The thought only fuels my want. If he wants a real man, then that’s what he’s getting.

Jax begins to lift the hem of my shirt, but I pin his wrists one-handed, in front of his body.

I prod my tongue against his lips and he opens up, so I can deepen the kiss.