I'm excited to have Author Katerina Ross on my blog today. 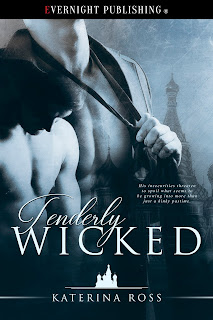 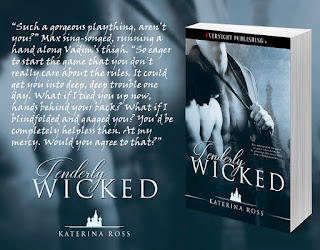 Excerpt
When they were deep into the park, Max stopped and brought Vadim to a halt, too. “See those bushes?” He pointed at hazel shrubs on the hill slope above the path. “Go there and fetch me a branch. A supple one. And remove the leaves and small twigs. The smoother it can be, the better. Better for you, this is.”

Vadim shot an apprehensive glance at him.

“Yeah, I suppose you guessed it right,” Max confirmed. “I did say we had to work on your punctuality. I tend to keep my promises. Luckily, the necessary implements are available on every tree. Convenient, isn’t it?”

For a moment, he felt a twinge of uncertainty, despite an attempt at a joke. Was he pushing too far? But it was only a moment, and then Vadim marched to the bushes without a word of protest. Max let out a breath he didn’t realize he was holding.

When Vadim presented him with his trophy, Max inspected it thoroughly and even tapped at his palm with the rod. “Acceptable,” he said. It was quite resilient.

“Now come here.” With a switch in his hand, like a shepherd, he guided Vadim to a thicket of bushes and onto a small grassy clearing among them. It was the closest thing to a secluded grove they were going to get. “Bend over there.” Max pointed at the nearest tree with the tip of his switch. “Lower your pants.”

It was unlikely someone would see them from the path, but still, Max stood so that he was able to monitor this direction in case some picnic enthusiasts came looking for a hidden clearing, too. He was now at Vadim’s left side, enjoying the view of his well-shaped buttocks, so obscenely white before the first touch of the switch.

“Do you remember the number of minutes you were late?”

Vadim shook his head, silently, his palms flat against the rough bark of the tree, his pants and underwear down around his ankles.

“Too bad. Fortunately, I remember it all too well. Twelve minutes. Guess how many swats you get for this.”

The first stroke was gentle, barely more than a tap. Max tested his aim and the force of impact. At the second one, maybe too intense, Vadim let out a hiss. Max stepped closer and gently rubbed the pink welt that appeared on the pale skin. “Don’t clench. Don’t fight it. It’s for your sake after all. It’s for you to remember that you should plan your life more efficiently. You better count, out loud. Show me you embrace the lesson. Okay?”

Max applied the strokes slowly, with intervals, waiting for Vadim to count them and not applying the full strength this time. He used his arm only from the elbow down and was careful to watch that the light, flexible end of the switch wouldn’t bite into the outer flank too harshly. When six slim, even lines had appeared across Vadim’s buttocks, Max decided to pay attention to the back of his thighs as well. They seemed to be even more sensitive. Vadim almost jumped every time the switch landed across the delicate skin, and yet he was pressing back to meet each slap. After ten blows, he suddenly reached around and pulled his butt cheeks apart so Max could add two more onto his twitching hole, which Max did, surprised and aroused by this uncalled-for act of submission.

After that, with the switch still in his right hand, Max stroked its length across the tender insides of Vadim’s still spread buttocks—a feather-like touch that made Vadim suck a sharp breath in, much to Max’s delight. So responsive. So obedient. Mine. The proprietary feeling that welled up from deep within him was intoxicating.

About the author:
Katerina Ross lives in Russia and works as a journalist. There are no M/M publishers in her country at all, and thus she wrote a hot and kinky M/M romance in English. It’s set in Moscow, so you’ll get to know the city she lives in.