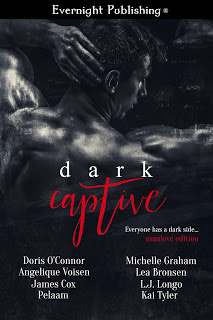 Blurb:
Everyone has a dark side..,

Kidnapping, abduction, and sexual slavery are just a few of the titillating taboo themes in this hand-picked manlove anthology.

Collecting His Debt by Angelique Voisen

I Love the Way You Hurt Me by James Cox

Get Off Hard by Lea Bronsen

Collecting His Debt Blurb:
He wakes a beast inside me that I can’t ignore, but I want what I can’t have. Carter Slater is twenty-one, a promising football star, and I’m a stone-cold killer, a debt collector. He’s the son of my enemy, completely out of my reach, until the night I save him from a group of gay bashers.

Even bruised and injured, Carter is perfect, grateful for my protection, but I didn’t save him for noble reasons. Once I get a taste of him, I can’t stop, and neither can he. I need to possess Carter in every way, even if that means making him my captive.

Excerpt
“Are you going to kill me?” My voice sounds calm, strange, like my mouth and body no longer belongs to me.
He reaches me and my heart thuds in fear and incomprehensible anticipation. I look up at him, daring him to make the next move. Logic defies my action. Any rational being will fight and claw his way to freedom, but I’m not one of them. My dad says I’m born wrong, not just because of my sexuality, but my internal mechanism isn’t the same as everyone else’s.
This stranger says I’m his prize, helpless, and his to toy with, but that’s not entirely true. Bruised and bloody, I knew there’s something broken in him, because I see myself in him. I don’t even know his name and he might know everything about me, but we’re alike.
Grabbing my chin, he tilts my head up, so I’m looking into his face. Christ, those eyes. They tell me secrets I don’t want to know, and call to all the dark parts of me I make sure to hide from my father, my teammates, and the entire world for fear of discovery.
What did it matter? I told my very own angel of death to spare Rod, Bron, and Barry. If they live, my secret would come out, and ruin my career. I tell myself I play football to get back at my father, to prove I can make something out of myself, but despite all that, I’m still that scared little boy, eager to please. Where did that get me? I tried to be what my family wanted—good little Catholic boy, loyal son, everyone’s golden boy, but I’m tired of being what I’m not.
My father will hunt me down if word gets out about the truth he’s worked so hard to hide, even though we haven’t spoken in years. The chief’s done with teaching lessons. He’ll make certain I’m lying in the dirt.
Did I even love Rod, or is what I want the allure of the forbidden?
I don’t have anything to lose. I’m free and it feels fucking good, amazing even.
“You shouldn’t be looking at me like that, golden boy,” he says, voice harsh.
I can hear the longing in his voice, and the pain he tries to hide. “How am I looking at you?”
“This isn’t going the way I fucking thought it would. I thought you’d have more fight in you.”
“You saved me,” I state, but he frowns, furrowing his dark brows, not understanding. “You almost sound disappointed.”
He barks out a laugh, the sound like gravel, but it sends a flutter in my belly. Fuck, but he’s exactly my type. The kind of guy I go for, because I’m sure he won’t disappoint in giving me the kind of sex and right amount of pain I crave.
“I didn’t save you because I want to be model fucking citizen of the year. You’re mine, golden boy. Mine to torment and tease, break apart and build back up again.”