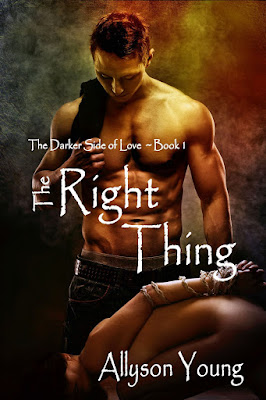 The Right Thing by Allyson Young

The Right Thing was previously released in March 2013.

Michael found his perfect submissive in McKenzie and has reveled in training her. She is the faultless masochist to his sadist yet Michael refuses to accept he has also fallen in love with her. He is terrified to give her his heart and makes every attempt to drive her away. When Michael threatens a course that will destroy them both, ’Kenzie accepts defeat and leaves, choosing to save him from himself. This time her deep and abiding love dictates she must lead in order to serve. Michael desperately searches for her, knowing she has nowhere to go, no one to turn to—he has come to his senses too late. Fate intervenes and he is granted another chance to proclaim what he now admits: he loves McKenzie more than life itself. All it takes is a promise to restore her trust and Michael does the right thing.

He had no memory of crossing the room or of taking his cousin by the shoulders and shaking Jenifer until her up do came down. The impact of the stiletto on his toes brought his attention back in short order.

“Where?” He didn’t recognize his voice. His one word question erupted from somewhere in the middle of his chest or a little lower, and was painfully quiet, if chock full of some kind of emotion he didn’t stop to analyze.

Jenifer actually stepped back a pace and regarded him with what looked a little like consternation. This was clearly a big learning curve for both of them.

“I’ll take you. I have no idea of the address but Gerald will drive us. I slipped out before McKenzie noticed me so she wouldn’t run again.”

He didn’t want to go with Jenifer. He wanted to go by himself and make a careful plan. But maybe this was better. He wouldn’t get too crazy if Jenifer was with him, and McKenzie might feel reassured if she saw his cousin too. He would sweep his woman up in his arms like the Prince did with Cinderella and bring her back home. That was the real royal equation. Jenifer would pat McKenzie’s hand or something and tell her it was for the best.

He was suddenly adrift on hope and, with what he hoped would be to his everlasting credit, his cock took a backseat to his heart. Nodding, he followed his cousin out of the apartment without any regard for his appearance, clambering into the limo. Gerald pulled out into traffic and despite Michael’s raving hurry, got them there in a remarkably short period of time. McKenzie was hiding in plain sight, maybe right from the day he drove her out. His heart pounded so hard he was certain the windows were vibrating in concert with the thumping and it hurt to take in a full breath. His sub was alive and he would go in and find her there and she would run to him and apologize for worrying him and he would take her home and punish her and propose to her and it would all turn out.

He blew through the door with Jenifer hard on his heels and the fantasy went to shit.

He saw her immediately. McKenzie raised her head in response to the weight of his stare, not, he was certain, as a result of the little tinkling bell over the door. He never wanted to see that look again, although knew he’d see it in his sleep for decades to come, a poignant reminder whenever he fucked up.

The blood drained from his woman’s face and even her lips looked colorless. Eyes resembling nothing less than starburst sapphires shone above the dark circles etching the fine skin beneath them, dominating her sweet face. She looked absolutely exhausted, thin, totally beautiful and horrified and his sadist didn’t respond an iota, not even when her expression turned to abject terror. Her small hands came away from the heavy iron she’d been pushing along some fabric to lift in front of her, as if to ward off evil.

Sweet lips parted and even with the cacophony of sounds in the shop he swore he could hear McKenzie suck in a gulp of air with the intensity of being administered last rites. She began to back away, body trembling, even hidden from view as it was beneath some kind of white smock.

A little Chinese woman shrieked something, breaking the spell, diving for the iron beginning to smoke against the material it rested on. The grey, curling vapor added to the bizarre affect and Michael wondered if the sprinkler system would engage and cast a further pall over the whole scenario.

The woman waved her hands frantically and distracted him for a moment. When he looked again at McKenzie she was clutching the circular rack from which all kinds of clothing hung, and he could see her white knuckles even from his position on the other side of the counter.

Pushing through the opening by the cash register, he slowly approached his terrified sub, never breaking eye contact, broken but gentle words falling from his mouth, trying to reassure McKenzie so she wouldn’t run, to ease the look on her face.

A large woman stepped between them, followed by a man a quarter of her size, presumably the other half of the woman now brandishing the iron, and Michael halted. He felt like a predator denied its prey, though a gentle, loving predator.

“McKenzie. Please.” He didn’t think he had ever pleaded with her before but would crawl through broken glass, through fire if need be. “I’d like to talk to you.”

“This the guy who fucked you up, Kenzie?” The female wrestler tossed the question over a broad shoulder in McKenzie’s direction, no doubt wanting to toss him out the door on his ass. 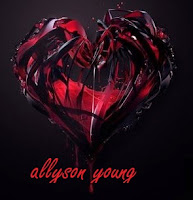 Allyson Young lives in cottage country in Manitoba, Canada with her husband and numerous pets. She worked in the human services all across Canada and has seen the best and worst of what people bring to the table. Allyson has written for years, mostly short stories and poetry, published in small newspapers and the like, although her work appeared in her high school yearbooks too! After reading an erotic romance, quite by accident, she decided to try her hand at penning erotica. Allyson will write until whatever she has inside her is satisfied- when all the heroes man up and all the heroines get what they deserve. Love isn’t always sweet, and Allyson favours the darker side of romance.