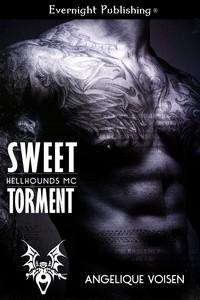 The apocalypse came and went, but hell is just about to break loose in .

Everyone knows the rules. Those who mess with the biker Sweet, always end up in the dirt. Ruthless, unchained and free, Sweet screws the way he rides…until he meets .

A vicious player arrives in town and the Hellhounds need to keep the bloodshed to a minimum. The Collector takes young men captive, breaks them to see them burn, and is his brightest star yet. Rules exist so Sweet could break them, but taking for his own might mean his end and the end of the club.


Excerpt:
Sweet snarled, but his control only slipped for a second and that smile was back. “I’ve never pretended to be a good man, but I’m a much better choice than the Collector. Come with me. There’s nothing but wasteland between and the next shantytown. How far can you run? Am I such a horrible choice?”

Sweet thumbed the hammering pulse on ’s neck, traced his way down his collarbones, and lingered left of ’s sternum where his heart beat in an unsteady rhythm. Was the biker trying to make a point? Hard to argue and come out with lies if ’s body betrayed his desires. Equally difficult for not to imagine how those callused fingers would feel, curled around his cock.

He swallowed, not liking the allure of the forbidden. Each second he lingered here hampered his chances of escape, but experience taught him the Collector would find him no matter what.

“Kiss me.” Horrified, didn’t realize he’d uttered those two loaded words out loud. What the fuck was wrong with him? The neediness in there pissed the hell out of him. That was good, anger gave him clarity—or should have. Sweet took that as an invitation and did just that.

should have figured a man like Sweet didn’t kiss. He gripped ’s jaw, tipping his head backward and took the plunge. ’s eyes widened. Sweet claimed his mouth like a starving man eager to have his fill. Christ. couldn’t recall the last time anyone kissed him—the toe curling and complete mind-numbing kind.

Customers usually only used his mouth as another hole to ease their relief. forgot how good it was, how intimate it felt.

Searing heat and the intoxicating taste of Sweet flooded down his throat. ’s insides melted. He yielded against Sweet’s hungry mouth, wanting more. He clutched Sweet’s broad shoulders, sinking his nails into skin and ink, and drew pinpricks of blood.

responded, catching Sweet’s bottom lip with his teeth. He sucked and nipped, closing his eyes as Sweet began exploring every inch of him. Sweet didn’t seem to care, or look disgusted by the abrasions and scars he found, only stroked them with a thoughtful gentleness that surprised . He squirmed when Sweet reached lower, seeking his thickening prick.

No. couldn’t have that, not yet and not here at least. Once Sweet closed his digits and held his cock captive, it would become the prelude to something. Some kind of messed-up relationship refused to put a label on.

bit down and Sweet let out a pleased rumble before pulling back from his mouth. Panting, looked at Sweet, bewildered. He wanted more, to take this further and the bastard knew it too. glared at Sweet.

opened his mouth, ready to sass back, but Sweet took that opportunity to thrust his tongue into ’s mouth. This man, thought, was beyond dangerous.