I'm happy to have Author Alyson Young on my blog today. Welcome, Alyson! 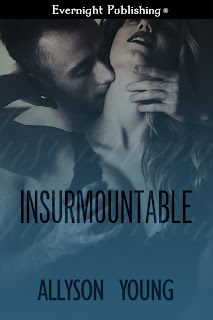 Blurb:
Kidnapped because of her father’s wrongdoings, Bianca Fontaine is interrogated for any hint of his whereabouts by a man she has no reason to be drawn to. Who falls for their kidnapper? Especially an arrogant, hard man who is bound by duty—with those intriguing soft and caring qualities he hates to show. She’s learned the truth about her mother’s disappearance and her reality is suspect, except for the one constant—Ellis Valiant.

Ellis Valiant is indeed a hard man, but he’s already destroyed Bianca’s world and could make it worse if he doesn’t send her away. But when he finds her exploring her submissive side in the sex club fronting for his organization, his noble efforts fall by the wayside and he steps up as her Dom. Except Ellis harbors a secret, an insurmountable one, and Bianca will surely hate him when it comes to light.

Excerpt:
Pushing her into the back seat of the closest SUV, his big hand on the crown of her head, between it and the door frame, invader number one climbed in beside her. The man who said she was worthless as a hostage got in behind the wheel. Scrambling across the leather surface, Bianca huddled against the door, wondering if she might throw herself out and make a run for it. But where? There was no ally in the traitor Mrs. Doucette and they’d probably shoot Max in retaliation. She prayed the housekeeper would care for her dog as she promised. The older woman had never been anything but kind to him, but then she’d been kind to Bianca too. Bianca chewed the inside of her cheek. Maybe her father would get Max back when he ransomed or came for her. She had to hold onto some kind of hope of rescue, maybe before things happened to her. Anybody with money at her schools was versed in possible kidnappings, and the lurid tales left a vile taste in the back of her throat.
The man beside her pulled off his hood, running his fingers through flattened hair. Bianca stared. She knew she was staring, but was incapable of doing anything about it. It was like looking at a carefully sculpted face of a Roman god. High cheekbones, deeply set golden eyes framed by a thicket of black lashes under dark brows, incongruous with the thick blond hair curling to his collar, and a chiseled set of lips. The door shut, plunging the vehicle into relative darkness as its light extinguished and deprived her of that rock star visage. Of a killer.
“Fuck, man. You let her see your face!”
His deep voice retorted, “It’s not like Fontaine doesn’t know who crashed his party, Dave.”
Over the grind of the ignition she heard the driver mutter, “And it’s not like she’s ever going home.” A shadow of fabric passed in front of the muted lights from the dash instruments for a moment as he too pulled off his mask, tossing it aside. Her chances of surviving this just narrowed from fifty to zero percent, and she desperately needed to pee.
They drove in silence, the other vehicles falling in behind to form a convoy as they bumped through the ruined gates and gained the main road. Aside from their initial comments, neither man spoke, and she too remained silent. Her thoughts clamored to be heard but she couldn’t put them in any real semblance of order. Kidnapped. Check. They were going to make her talk about her father. Check. They planned to try to ransom her. Check. Except they didn’t think that would prove fruitful. Wouldn’t her father move heaven and earth to get her back? Except he wasn’t a family-first kind of guy … she didn’t want to understand the inference but accepted it was huge. Nightmare. Check. She concentrated on her breathing and drew on her reserves when she really wanted to scream the roof down.
“What’s with her, Ellis?” The driver finally spoke up. “She hasn’t said boo since she gave up the old man. Must be her father’s daughter, eh?”
Feeling his eyes boring into her, she turned inward. Ellis. An unusual name. Had she heard it before?
“Plenty of time to talk later, Dave. You hear of shock?” Ellis spoke quietly.
“Maybe,” answered Dave. “Most women would be crying and carrying on though. Can’t say I don’t like her reaction. Easier to put up with. Although there’s a ball gag in the dash.”
Ball gag? She bit her lip and swallowed convulsively, an action so awkward it hurt her throat.
“You plotting, Bianca?”
Despite herself, she jerked when Ellis used her name. Had she really thought they wouldn’t know it? Especially when they seemed well apprised of other things involving her father. A thought right out of the blue struck her with the same impact as a blow to the face might. Did they know where her mother was?
“I expect an answer, little one.” The velvety threat wove through his voice.
She shook her head, not trusting her voice. His hand grasped her upper arm and dragged her closer. His scent overwhelmed her, leather, gun oil and male. “Answer me. Are you plotting?”
“No,” she whispered. She stared into his face, the flood of lighting from the other cars’ headlights giving him a faintly demonic look. Had Mike seen that look in his eyes before this Ellis struck him down?
He released her with a slight smile. “Good. Then I’ll leave you to it. If you try to escape you’ll be punished.”
Easing back, building distance between them, Bianca tried to get her shakes under control. So far he hadn’t hurt her, despite his obvious ability to do so. She decided not to think about what this Ellis meant by punishment, and instead considered what might lay ahead if she cooperated. They seemed professional, like her father’s bodyguards, although surely Mike had taken a stupid risk—and paid for it. She didn’t particularly care for the man, but now tears pricked. His sacrifice had been for naught. She could hope they would treat her like a valuable commodity—until she wasn’t.

Allyson will write until whatever she has inside her is satisfied- when all the heroes man up and all the heroines get what they deserve. Love isn’t always sweet, and Allyson favours the darker side of romance.