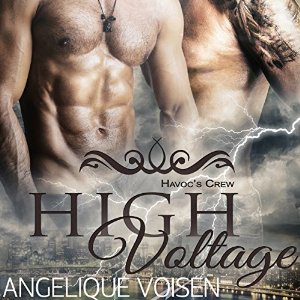 Blurb: There's a new player in Lyon City powerful enough to shut down the city's electric lines and the job is right up Volt's alley. Volt isn't always the easiest man or wizard to deal with. The only person sane enough to put up with his bullshit is his apprentice, tabby shifter Heath Bones, but even Heath's patience is running out.

He wants Volt badly, but the elemental only cares about his work and his brothers at Havoc's Crew. Quitting his job and leaving Volt is the best decision he's ever made, right until he's taken hostage by a major league demon. Vanquishing demons, rescuing damsels and ravishing them after is all part and parcel of being a member of Havoc's Crew, but Heath isn't just any damsel. The more Volt tries to sizzle his desire for his apprentice into nothing, the more it threatens to explode into high voltage.

Peter Verbena lives in the Queen City, Ohio with his much better half, and 3 kids. When not narrating audiobooks, he enjoys a good horror movie, playing music and taking the family to interesting locations. A particularly big fan of the audiobook format, Peter is honored to use his unique voice in bringing great titles to audio, starting with Angelique Voisen's Havoc's Crew series.
Labels: 2015, audiobook, havoc's crew, high voltage, new adult, new release
Newer Post Older Post