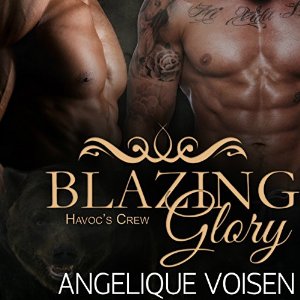 Blurb: No one can hold a candle to Blaze. He's the only pyromancer in Havoc's Crew, and everyone knows Havoc's Crew is the best magic outfit in Lyon City. When an accident leaves Blaze disfigured, all he wants to do is disappear. When a wave of zombies threaten the city it's up to him and bear-shifter Levi Black to clean the mess up, but the shifter seems more interested in him than the mission.
Blaze isn't the kind of man Levi would normally take on any of his runs, but he doesn't have a choice. The conceited pyromancer is supposedly the best, but the last thing he expects is a broken shell of man able to bring his protective animalistic instincts to the surface. Getting rid of the undead is the easy bit. The hard part is convincing Blaze he loves him even with his scars.

About the Narrator
Peter Verbena lives in the Queen City, Ohio with his much better half, and 3 kids. When not narrating audiobooks, he enjoys a good horror movie, playing music and taking the family to interesting locations. A particularly big fan of the audiobook format, Peter is honored to use his unique voice in bringing great titles to audio, starting with Angelique Voisen's Havoc's Crew series.