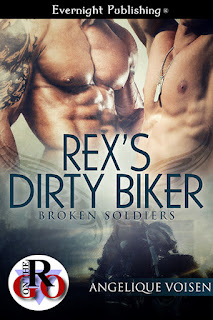 Blurb: Thrust into the middle of a war zone with his unit, Rex Chambers desperately clung to one sweet dream to survive—a life with his woman. A single bullet to the spine landed Rex back home, crippled, damaged, and in need of fixing. But all that’s waiting for Rex is an empty apartment, a hasty good bye, shattered dreams and a dirty-mouthed biker.

The former member of a MC, Jensen “Riddle” Matthews has ridden through hard roads and made bad choices. Learning his little sister bailed out on Rex, Riddle steps in, knowing Rex’s on the verge of falling apart. Riddle has always held a torch for Rex, but can the spark between them be enough to save a broken soldier?

Teaser
If Rex had trouble reconnecting with the world, then I had to forcefully remind him of life. Melt all that numbness away and replace it with something else.
His eyes narrowed when I leaned over. I chuckled. He was wary and watchful like a predator.
“What, you think a little kiss is going to make things better?” he said.
“A fucking kiss? Are we in high school?” I said. “Hell no.”
He seemed confused, and I took advantage. I wrapped my hands around his waist and lifted him from the chair. Rex had packed on a couple of extra pounds, all of it hard muscle, but it didn’t matter. Ignoring the curses he flung at me, I lowered him to the couch, so his legs dangled over the edge.
I dropped to my knees, yanked down his sweat pants and drew out his thickening shaft. I kissed him on the inside of his thigh, then his cock head, before I licked away the glistening cum on his tip. I nibbled softly, applied a little pressure over his balls, massaging them until he groaned. Silken texture began to harden underneath a sheath of steel.
“Jesus, Riddle.” Rex grunted, but he didn’t push me away. He twined his fingers into my hair, reeling me in close. Hesitation must have crept in, a momentary weakness, because he said, “wait, we shouldn’t.”
His resistance had been reduced to one paper-thin barrier, and I knew I’d won. He wanted this so much, but kept himself back. Whatever arrangement we had—too early to call it a relationship, or anything else, it may be nothing more than random fucking. Something birthed out of desperation and need, but if it pulled Rex to reality, then what did it matter?
“Let me take care of you, baby,” I whispered, ignoring the sharp tug he gave my hair. Looking up at him, I watched the bead of sweat roll down the chords of his throat, before pinning his gaze with mine.