Unprofessional by Allyson Young
A Romance on the Go
Releasing: September 25, 2016 from Evernight Publishing
Blurb:
Hannah Evans is personal assistant to the very professional Benjamin Willis, and he keeps her firmly in that role. Her boss is a great man, and if he rewards himself with a large number of blondes, well, even great men can be misguided. Hannah couldn’t ask for anything more in her job—except she’s fallen for her boss. And now Mr. Willis seems to be seeking more than mere pleasure. What if he finds a woman with a beauty and brains? Unable to bear the idea, Hannah submits her resignation. Faced with losing her, Benjamin’s entire being reacts in shock, dismay and outrage, causing him to examine how he actually views Hannah. She has had months to come to terms with her strong emotions while he has had mere hours. But Benjamin is a quick study and discovers his true feelings for the woman who has been right under his nose. 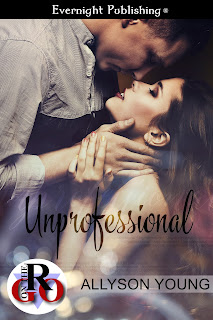 
Excerpt:
“Hannah.” Her name fell harshly from his lips and she blinked several times, appearing to get herself under control. “Tell me why you’re leaving.” Leaving me.
“I appreciate the opportunity,” she nearly whispered. “Seeing as I had no experience.”
“You said that in your letter of resignation,” he agreed. “And I was happy to give it to you. You proved yourself quickly.” He shifted a tad closer and studied the rising color in her cheeks.
“I … I can’t stay on. Big world of opportunity out there and all.”
“You’re not telling me the truth. How bad can it be?”
Giving into an instinctive urge, he grasped her other hand and hauled her close. He locked his gaze with hers when she looked up, startled. “Tell me,” he insisted.
“I can’t.” She nearly whimpered and a good man would have backed off and let her go. He couldn’t find it within himself to do it.
Recognizing he couldn’t force her to confide, he resorted to sneakier tactics. He turned on the charm and cajoled. “Hannah, you’re invaluable to me and I can’t get my head around finding someone to replace you. Is it something I’ve done? Is the salary an issue?”
A shake of her head sent more strands of hair drifting down to her shoulders, these longer than the others, and they rested against the upper swells of her breasts. His stare traced their path before he glanced up to see her eyes wide with surprise. God, she was lovely. Smart, skilled and talented, all woman. Different from—
“Benjamin?” His name wasn’t on Hannah’s lips but spoken at his office door. He recognized that voice. “Benjamin?”
He could only imagine how it looked, his disheveled PA sprawled in a chair, him kneeling at her feet, holding her hands captive and their faces mere inches apart. With an effort, he turned his head and acknowledged his latest fling. Past fling. “Give me a minute, Tiffany.”
Hannah quivered and tried to pull away, but he hung on tightly, willing the tall blonde out of his office.
“I see you’ve already replaced me,” she replied, scorn and anger coloring her voice. At any other time, he might have found her alluring, all flushed with outrage and passion. As usual,Tiffany was dressed to the nines in a body-revealing outfit that displayed her long, slender figure and enhanced breasts to full advantage. But she left him cold, something new, because he rarely tired of his blondes physically, choosing to keep his hookups brief to avoid emotional attachment.
Tiffany sneered at Hannah. “She’s hardly your taste. Pudgy and plain, wouldn’t you say?”
If he hadn’t known to keep hold of Hannah, wrapping his hands around Tiffany’s elegant neck might have been an excellent alternative. “Get out.”
“Gladly. You’re welcome to him, secretary-type. It won’t last, especially as he’s slumming.”
He spared her only enough of a look to ensure she had indeed gone before turning back to Hannah. Who was staring at him with a multitude of emotions washing over her expressive features.
“She’s different than the others.” Well, that was the last thing he expected.
“Excuse me?” He knew he sounded astonished.
“She has a career. So she must use her brain. And she meets all your other criteria.”
Hannah would know, he acknowledged inwardly. Except it appeared she was wrong— his preferences were changing. Had changed. His lower body, and not his now aching knees, was in total agreement. Hannah had been under his nose all this time with her quiet, efficient ways and non-intrusive manner, yet he would bet she knew more about him than he knew about himself. But she was leaving, so obviously didn’t feel the same. No point in opening that door, especially as he lacked the tools. He ground his back teeth against a disappointed growl and clambered to his feet after carefully setting Hannah’s hands on her lap.
“I’m sorry she said those things.”
“Which ones?” She sounded intent, earnest, and peered up at him.
“She insulted you.”
Hannah shrugged and those round breasts lifted higher on her torso. “No comparison. We aren’t even the same species, I don’t think.”
Benjamin laughed. That was the effect Hannah had on him despite all that had just taken place. He felt … happy around her. And there was that shift again. She’d been an enormous part of his life for over a year. He’d spent more time—awake at least—with her than any other person. His laughter faded when he imagined the future without her.

Allyson will write until whatever she has inside her is satisfied- when all the heroes man up and all the heroines get what they deserve. Love isn’t always sweet, and Allyson favours the darker side of romance.