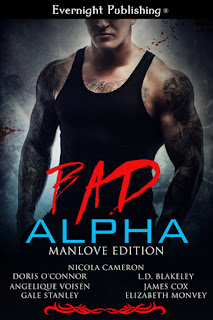 Blurb:
Bad Alpha features a select collection of stories with shifters so ruthless they will stop at nothing to protect their pack. These aren't sugar-and-spice heroes. Our alphas are feared, inked, and don’t ask questions first. They take what they want, never give in to their enemies, and think love is for the weak—until they meet their mate. Are you ready to learn how to tame a savage heart?

Excerpt from Discarded Pup:
“Holy shit.” River looked up, expecting fangs and fur. His turn next, he knew, but malice remained absent.
All he saw was miles of sweat-soaked muscles and ink. The scent of fresh kill and blood hit his nose, but underneath the smell of fresh violence, lurked the alpha’s signature scent. Pine mixed with cigarette smoke, leather and motor oil. Wolf musk. The scent of a powerful male.
“Something funny, little pup?”
Fingers curled into his hair and jerked him up. River mentally took inventory—cropped dark hair, hard denim-blue eyes set in a face lined with sharp angles. River’s heart thumped painfully against his chest. Why did it hurt so much to breathe? It felt wrong, to feel emotions other than raw fear.
“Don’t call me that. I have a damn name, you know.” God. How could he still be talking? Worse still, the alpha didn’t cuff him the way Jonah did when River mouthed off.
He leaned in close, severing what little distance was left between their bodies.
“Do you now, pup?”
Nothing about the alpha was soft, River realized. Every inch of him was hard, unrelenting, and cruel like steel. Speaking of hard, River became aware of the alpha’s erection, pressing firmly against his belly. The way those frightening dead eyes stared right at him, as if he were intent on unearthing his soul. River’s deepest secrets. His shame. Whatever thoughts crossed the man’s mind, none of them were pleasant or safe.
The blatant truth was there too, whispering through the heat ignited between their bodies. The way the alpha’s bare flesh collided against the thin material of River’s shirt.
The man’s lips curved into a smile. There was nothing nice about that smile either. River whimpered. His imagination ran on overdrive. River imagined a man like this—a man who saw what he wanted and took what he wanted, no questions asked—wouldn’t be capable of sweet kisses or lovemaking. He would consume and devour. Take and leave him wanting and panting, without ever giving River an inch.
Jesus, what was this man doing to him?
“River Daniels, you have no fucking idea how long I’ve waited for this moment.” The man’s breath felt warm against his neck. River felt something wet—the alpha’s tongue!—flicking and licking at his jumping pulse. “To meet you. Finally take you and make your sweet body mine.”