I’m excited to welcome Author Beth D. Carter on my blog. Beth is here to do an interview and share with us her latest release, The Alpha Gladiator.

What’s your favorite thing about being a writer/author?
My favorite thing is breathing life into characters I create. I think about stories, I think about scenarios.  I am constantly working through plots and solving problems.  I work and rework dialogue until it’s perfect.  I build backstory and complete character arcs.  And I absolutely LOVE it.

Why do you write?
I write because I have to.  Some people have a compulsion to exercise eight hours a day training other.  Some people work day and night to save lives.  Some people fight tirelessly for the environment or for animal preservation.  We’re each born with the ability and need to do something and for me that is writing.

Do you read the same genre that you write? Why or why not?
Absolutely!  I started reading romance when I was in the fifth grade and picked up one of my mother’s Harlequin Presents.  Maya Banks introduced me to erotica romance and I never looked back.  But I love books in general.  They are definitely my drug of choice.

What would you like to tell readers about yourself?
I have a very dry sense of humor which I put into my books, usually through the comic relief characters (like the best friend).  I usually write about places I’ve lived or been, so my books are set all over the place, including Paris, France where I lived for four months. 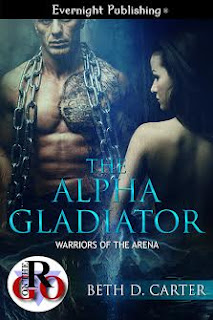 Okay, I admit it…I fell in love with Spartacus as played by Andy Whitfield in the Starz adaptation.  How horrible that he succumbed to non-Hodgkin lymphoma shortly after wrapping up the first season. During the second season, the producers decided to introduce a new gladiator which, in my opinion, was one hot hunk to watch!  So when the third season came back, with a new lead to play Spartacus, it didn’t seem such a sad departure from Andy.

I became fascinated by the dynamics of the politics behind the gladiator games.  The origin of gladiatorial combat is open to debate. There is evidence of it in funeral rites during the Punic Wars of the 3rd century BC, and thereafter it rapidly became an essential feature of politics and social life in the Roman world. Its popularity led to its use in ever more lavish and costly games. The gladiator games lasted for nearly a thousand years. (Thanks, Wikipedia!)

The Alpha Gladiator was actually written to be part of an anthology, but it came out as too sci-fi, so I switched it to the novella story line, Romance on the Go, for Evernight Publishing.  The Spartacus story might have provided the idea, but I moved everything into a futuristic slash paranormal setting.   The next story I have planned in this line features more of the slave and gladiator dynamics, not quite so paranormal but still within the realms of mystical.  Hopefully that will be written soon, after I wrap up a few other series.

Blurb:
Ravage is the fierce Alpha of his people, the Lycans.  During the mating celebration, while their guards are down, his people are attacked and twelve are captured for the gladiator games of Kappuah, including Aleirah, the woman Ravage wants above all others.

He tries to resist, but he’s unwilling to see his men and his female harmed by the ruthless tyrants of the games.  He must make the ultimate sacrifice of taking lives if he’s to protect his people.

But there is one secret no one knows, and Ravage is more than willing to show how some myths are based in truth, by letting his inner wolf come out to destroy all those who enslaved them.

Excerpt:
“I remember.”  He looked around.  “You are a compassionate woman.  Caring and kind.  You would make me a great mate.”
Her mouth dropped open. “Excuse me?”
“A mate.  I have been waiting for you to enter the mating ceremony for ten years, Aleirah.  Surly you knew that?”
She shook her head.  “No.  I … ah … no.  I don’t think I would make a very good mate for an Alpha.”
“Why would you think that?” he asked, a bit vexed.  Ravage was fast learning she could be a little stubborn.
“I’m…” She paused and cleared her throat.  “I just don’t think I would.”
“I beg to differ, and I hope you allow me to change your mind.”  He stepped closer to her and her breath hitched in her throat.  He tilted her face up and her mouth dropped open on a breathless little sigh.  The he offered her his elbow.  “Would you take a walk with me through the night?”
She bit her bottom lip with her top teeth, and the action had an interesting effect on his dick, which jumped to attention.  Ravage could just imagine her sinking her teeth into his shoulder as he thrust into her beautiful body.  Hesitantly, she took his arm and as soon as she touched him, he placed his hand on top of hers, trapping her by his side.  Now that he had her, he wasn’t about to let her get away.
He pulled her away from both bonfires, into the woods, letting the darkness shroud them.  Sometimes it was easier to let go of secrets and fears when the other person was cloaked in shadow.  The night had always been a friend of the Lycanis people, so Ravage used the moon to his advantage.
“I remember you from when we were children,” he murmured.
“I remember you too,” she said softly.
He grinned, pleased with her answer.  She may deny that she wanted to be his mate, but the pheromones coming off her body indicated otherwise.  Aleirah found him desirable.  Whether or not she wanted to be his mate, her body had already begun changing to accept his claiming bite.  Now, he just had to get her to admit it, and he wasn’t above using seduction on his part.

Author Bio and Info:
I like writing about the very ordinary girl thrust into extraordinary circumstances, so my heroines will probably never be lawyers, doctors or corporate highrollers.  I try to write characters who aren't cookie cutters and push myself to write complicated situations that I have no idea how to resolve, forcing me to think outside the box.  I love writing characters who are real, complex and full of flaws, heroes and heroines who find redemption through love.

I love to hear from readers so I’ve made it really easy to find me on the web:
https://twitter.com/BethDCarter
https://www.facebook.com/bethdcarterauthor
http://www.tsu.co/BethDCarterAuthor
www.bethdcarter.com
http://bethdcarter.blogspot.com/
Amazon author page: