I'm happy to welcome Author Raven McAllan to my blog. Raven is here to share her latest release with us, The Racing Driver's Wife.
*** 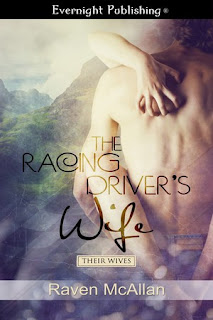 Hi all, thanks for dropping by and seeing what I've written. I do hope you're not too disappointed.
When I started writing this series, called 'Their Wives', I realized how much I like writing about strong feisty—independent—women who loved their men, but wouldn't stand for any crap. That's the only way I can describe it really. (And yes, I am an author snigger) There's no way they'll put up with any nonsense, and know what they want.
Luckily, their men know what's needed and of course they are well able to stand up for themselves.
Eventually.
But oh boy are they put through the wringer first…

Blurb:
Some risks are worth taking…
Racing driver Gael Lorenzo is used to taking his life in his hands, if only he could say the same for his errant wife. He meant his wedding vows, and there will never be another woman for him, but what can he do to win her back?
Darcy thought she knew the risks of being married to a man who lives for his sport. The reality of the race track, however, proves too much for her. Nevertheless, giving Gael up entirely, is not an option either.
When circumstances force them back into each other’s company, neither one of them can let this chance go. Together they are stronger than apart, and their marriage is worth fighting for, isn’t it?

Excerpt:
Darcy leaned on the ice rink's barriers and studied a tiny, red dungaree-clad tot who was no more than four years old and could do more on the ice than Darcy could off it.
"Looks good fun doesn't it?" The deep male voice, with its ‘come to bed’ accent reminded her of smooth rich chocolate, warm furry velvet…and sex.
Darcy turned and looked at the tall, dark-haired man beside her. Her legs almost buckled as her body decided mushy was the way to go.
"Not if you keep falling on your tush," she said and could have kicked herself.  What made her use that word for goodness sake? Talk about retro. The guy laughed.
"That depends who picks you up. Are you up for being picked up?" He raised an eyebrow and winked. "You game for risking it? In the best possible way, of course."
The double entendre made her giggle. "Well, um," Darcy looked down at his bare ring finger and back at his face. It seemed he understood his question because he smiled and shook his head.
"No ring, no wife, S. O. Or even non S. O. I was married." His face darkened for a second and a bleak expression crossed his face so briefly Darcy wondered if she had imagined it, before he sighed and straightened his shoulders. "She left me and rightly so."
"Damn, I'm sorry. It’s none of my business."
"Of course it is. You have integrity and don't want to consort with a married man."
Consort, there's a nice old fashioned word.
Darcy kept her face straight. "True enough."
"How about you, Miss…Mrs…?"
"Now, I could say Ms., and confuse you, but I won't. Single," well it was almost true, and sounded better than separated from a bastard, never see him, thank goodness, "spinster of the parish and no significant other either. "Darcy Murray."
Liar, liar pants on fire.
She held her hand out and he took it in his. The hand that dwarfed hers was warm and slightly calloused. He rubbed her fingers and Darcy gasped at the sparks of electricity that passed between them.
"Ah sorry, not enough hand cream and too much stall building." He let go of her hand and stuck his own hands in his jeans pockets. "Amongst other things."
Darcy was human enough to see how the action stretched the denim and outlined his contours, and bit back the groan that hovered over her lips. It would be mortifying to show him how he affected her.
"So Miss Darcy Murray, spinster of some parish. Are you game? Will you trust me to pick you up, dust you down, and not take advantage?"
Why not? It's about time I did something other than work and sleep.
"Okay, as long as you accept I'm a klutz."
He raised a dark-haired eyebrow.
"Seriously, I'm so clumsy it's a wonder I'm ever let loose with oil, let alone needles. Oh I'm a physio." She, carefully omitted the 'was' and 'only for a few selected friends' and did her best not to make her tone too interrogative, but hell she didn’t even know his name. "And I do acupuncture.”
"Ah, I'm not—a physio. I work with cars. Gil Lawrence."
Why did he hesitate over his profession and name? It irritated Darcy. Did he think she was going to ask for a free service for her car or something? She bit down the sarky retort she wanted to give and smiled instead, impressed with her self control. After all, how many people was she truly honest with? Honest enough to inform them that, 'oh I write erotica but I still do a bit of physio just to keep my hand in'. Not many.
"Cars and carnival stalls?"
"Cars are my life, carnival my hobby. Okay, carnival is me helping out a friend whose wife went into labor early. I got a frantic phone call, called in a flight path, grabbed the plane and arrived in time to get a crash course in health and safety, and remember how manual, manual labor is."
"Pleased to meet you." She didn't question some of his phraseology. After all it could be because English wasn't his first language. "Okay, let's skate…or fall on our bums." And boy didn’t she think she had a nicely wadded bum to land on. Gil, she must remember to call him Gil, on the other hand seemed as if he may well be short on the padding. Even under his long, droolworthy leather coat, his ass seemed perfectly designed to swoon over. Darcy mentally rolled her eyes at her fanciful notions. They were going to skate for goodness’ sake, not indulge in a mutual grappling session.  More's the pity. Argh give over, and grow up.
Gil grinned. "Well, at the risk of sounding sexist and getting my face slapped, it's a lovely bum you'd land on. Not that I think you will. You look as if you have a great sense of..." he paused and took her hand, "balance."
The icy air chilled her cheeks and Darcy laughed with exhilaration. What wasn’t there to be happy about? As Gil whirled her around someone bumped into her. Her hand slipped out of his grip, her hair fell out of its precarious knot and covered her vision, and she flailed in the air as she tried to save herself. Gil made a grab for her, but it was too late. To Darcy's embarrassment, her hand brushed his groin as she felt herself fall. Sugeroony, embarrassment central here. Darcy forced herself not to hold on to that hard bit of body she connected with. She moved her hand faster than if she'd been stung, ignored the laugh he emitted, and took a deep breath as she braced herself against the thump when the ice jumped up to greet her.
What a way to go.