I'm happy to welcome Author J.R. Gray on my blog. Gray's here to share her latest release, Damages Incurred, with us.
***

Damages Incurred Blurb:
Their world is crumbling on the King's shoulders.
Elliot is missing.
George has failed and his demons are threatening to swallow him whole.
Jesse's life is slipping through his fingers.
Zac is doing everything he can, but he's plagued with flash backs of a life he can't remember.
Can they get it together to save themselves or Elliot? 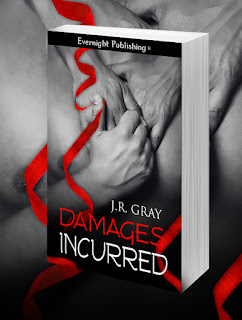 Excerpt:
It was dark when he stepped out into the back entrance of the penthouse. His footsteps echoed through the halls as he walked. George should be in bed as he was generally an early riser, but Jesse half expected him to be consoling his pain with a slave.
He paused in front of the play room, swallowing hard. What if his actions had been the final straw in George moving on? What if...
It was too painful to finish the thought. He set his hand on the handle, telling himself he could face what he found inside. He turned it silently and pushed the heavy door forward. It was dark inside, only the lights of the city illuminating the toys spread over the massive wall. The door was soundproof, but now that it was open, all he heard was the light snore of a slave. He closed the door quickly and then pressed a hand into his aching chest. He stalked forward, seeing the flicker of a fire on the wall as he approached the living room.
He stepped around the corner to find George looking pensive staring into the fire, drink in hand. He paused, waiting for an invitation. One never came. George acted as though he didn't see him. Jesse opened his mouth, but he didn't know what to say. There wasn't an apology that could even cover the pain he'd put George through.
He fell to his knees. "Forgive me," he whispered.
George didn't respond. Jesse fell forward pressing his forehead into the cool hardwood floor. Warm hands closed around his arms, dragging him to his feet, and he was enveloped in George’s arms. His eyes started to mist, and he couldn’t catch a full breath. It was all too much to bear. He’d left his heart when he left George, and there were no words for what it felt like to be back here. He buried his face in George’s neck and wrapped his arms around him. George kissed every spot he could reach on Jesse in their position.
It was so much more than dominant and submissive like this. Jesse’s heart ached. The pain radiated through his bones. He’d been holding off losing it for so long he hadn’t even realize how bad the pain had gotten, how numb he’d been.

Author Bio:
When not staying up all night writing, J.R Gray can be found basking in the warm glow of the Miami sun, or at the gym where it's half assumed Gray is a permanent resident. A dominant, pilot, and sword fighting enthusiast, Gray finds it hard to be in the passenger seat of any car. Gray frequently interrupts real life, including normal sleep patterns, to jot down nonsense. The bane of Gray's existence are commas, and even though it's been fully acknowledged they are necessary, they continue to baffle and bewilder.

If Gray wasn't writing…well, that's not possible. The buildup of untold stories would haunt Gray into an early grave or possibly a mental institution where the tales would end up on the walls in crayon and finger paint.