I'm happy to welcome Author Doris O' Conner to my blog. Doris is here to share with us her latest release, Panther Magic. Doris is also giving away a $25 Amazon GC and two e-books from her back list, so remember to enter your name at the Rafflecopter giveaway below. 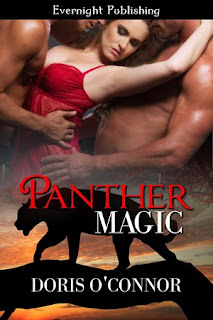 Thanks so much for having me on your blog today with my new release, Panther Magic, book five of The Projects series. :)

Do you believe in magic? My heroine Kate doesn’t. Not one little bit, so when she meets Zeb and Arran Harris at the spa-with-a-difference, she has no idea who these two hunks are—other than the men who set her bikini bottoms aflame with just one look.
Mind you, that insta-lust she feels does not mean that she’ll just roll over and forget about this magic act they do. Panthers, really?

It’s just downright cruel to subject such majestic animals to the glare of the stage lights.
Everything changes when Kate actually goes to see their performance, and she realizes the men are shifters. You can’t mistreat an animal that is in fact human, can you?
Well, maybe not…and it doesn’t really matter, because she can’t resist her men either. When they are in trouble, there is only one thing for it. Kate has to rescue them from themselves.

She might only be human, but she’ll show that overbearing council that human or not, she will and can fight for her Sirs.

Zeb doesn’t call her wildcat for nothing…

Prepare to laugh, cry, and get somewhat hot and bothered, because when these three get together, they ignite the pages.

Blurb:
There’s no such thing as magic…

Kate doesn’t believe in it, let alone the panther sort Arran and Zeb Harris are famous for. Using animals in their act is just downright cruel. If only she could convince her libido of that. Instead she seems to have fallen head over heels in lust with those sex-on-legs twin brothers. Getting laid will cure this, surely?

When panther shifters Arran and Zeb scent their mate, they know they’ll have a fight on their hands. The delectable human morsel might be submissive, but Kate has spirit, never mind the small matter she has no idea shifters exist.

They want her submission freely given and not forced upon her by the mysterious mating bond. However, when their panthers kill while rescuing Kate, that bond might well be the only thing to keep them alive.
It’s up to Kate to save her Sirs.

Buy it from Evernight  ARe  Bookstrand  Amazon  B&N

Adult Excerpt:
“Sirs, are we going to play—now?” The words came out hesitant, but her breathing sped up when Zeb walked toward her and placed the end of his crop under her chin to nudge her head up. He slowly ran it along her throat, rested it on each of their bite marks and then trailed it along her collarbone and into the valley of her breasts.
“I thought we might, unless you have any objections?”
Kate shook her head and whispered a shaky, “No, Sir.”
“Good girl.” Zeb trailed the tip across her lace covered breasts, and over each nipple in turn, and Kate gasped and tried her best not to squirm.
Arran barely managed to hold in a groan of his own. It was incredibly erotic watching their girl reacting to his brother’s strokes against her flesh. Her skin took on the rosy glow of arousal, and her nipples firmed into hard buds that strained against the delicate blue lace covering them. Zeb nudged her knees apart further with his foot, and traced the tip of the crop over her quivering abdomen and down to her delectable wet pussy. The fabric covering her slit darkened further, and Arran’s nostrils flared as the sweet musk of her arousal filled the air. His cock jerked, and he stroked along his length to give himself some relief.
Zeb looked back at him and smirked, and mimicked Arran’s actions on his own dick. Kate licked her lips when she noticed, and moved toward Zeb, but he brought the riding crop down between her legs. It flicked across her wet slit, and Kate jumped and moaned. It was such a deep throated sound that Arran’s balls drew tight, and he fisted himself harder.
“Such a naughty girl we have. So wet for us already, so eager for a cock, aren’t you? Tell me, wildcat, how badly do you want my cock?”
Zeb took himself in hand more firmly as he spoke to her, and Kate’s gaze seemed riveted to the action of his hand going up and down his shaft. Arran fisted himself faster, as Kate’s pink little tongue dipped out and licked her lips. Drops of pre-cum emerged from the tip of his cock, and he rubbed his thumb over his wet slit, and used the natural lubrication to fist himself harder. It felt way too good, and his grunt of pleasure brought Kate’s attention back to him.
Zeb laughed when he noticed.
“Or perhaps you want my brother’s cock?”
Kate looked between them, and she nodded.
“What’s that, girl? I can’t hear you. Which cock do you want? Mine or Arran’s, or perhaps you want both?”
Arran and Kate both groaned in unison, and Zeb’s grin deepened. His sadistic brother always did get a kick out of playing mind games, and seeing both Arran’s and Kate’s discomfort no doubt turned him on.
“Hmm, perhaps you’ll get your wish, and we’ll fill all your holes today. Would my little wildcat like that?”
A moan was his only answer, and without warning Zeb brought the riding crop down across her thigh. Kate yelped, and a red thin stripe appeared across her pale flesh immediately. Zeb repeated the action to her other leg, and tears sprang into Kate’s eyes, yet her sweet musk increased tenfold, and Arran’s beast near salivated at tasting the bounty between her legs.
“Yes, Sir, please, anything … I’m yours.”
Kate’s whispered reply was music to Arran’s ears, and Zeb winked at him.
“Good girl, you best start with my little brother then. He looks about ready to explode.”
Kate’s gaze sought Arran’s, and the love and need to please that shone out of her right now meant the world to him. She made to rise, but Zeb’s heavy hand on her shoulder stopped her.
“Who said anything about getting up, girl? I want you to crawl, and swing those hips and tits. Give Arran a show, and then suck him good. I don’t want to see a drop of his cum spilled, do you hear me?”
“Yes, Sir.” Kate’s eager reply and the speed with which she complied meant that Arran had to pinch the bottom of his shaft to stop himself from shooting his load like some inexperienced teenager. He was so fucking close already, and judging by the wicked grin on his brother’s face Zeb knew that, too. He mentally flipped his brother the finger, and then concentrated on the poetry in motion that was Kate crawling toward him. With an inherent grace that would have done any cat shifter proud she put one hand in front of the other, and slid her knees across the soft carpet, while swinging her hips from side to side.
Zeb’s face dropped, and he seemed unable to tear his gaze away from her ass. Zeb had always been an ass man, and seeing her pale globes so beautifully presented to him, had to be torture for his brother. Served the bastard right.
All conscious thought fled Arran’s brain when Kate reached him, looked up at him from under her naturally long eyelashes, and smiled.
“Sir? May I please suck your cock?”

To celebrate the release I’m giving away a $25 Amazon GC and two e-books from my back list. Entry via Rafflecopter.
a Rafflecopter giveaway

Stalk her in these places: