I'm happy to welcome Author Jennifer Macaire on my blog. Jennifer is here to share with us her latest release, Murder and Mayhem. 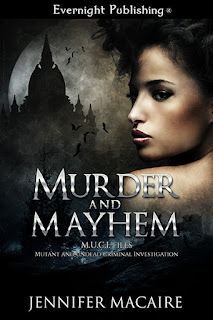 Thank you for hosting “Murder and Mayhem”! It's an urban fantasy with a dose of romance and a zest of humor. If you liked Buffy the Vampire slayer, you'll enjoy May, the vampire killer!

Blurb:
Meet May, the vampire killer. She's quick, clever, and deadly, and she takes life very seriously having been killed once before by a mob of rogue vamps. Her father, a powerful necromancer, brought her back to life. She's M.U.C.I.'s (Mutant and Undead Criminal Investigation) best man, er, woman, well, zombie actually, for catching and killing rogue vampires, so when two kids show up with all the signs of having been killed by a rogue, May gets the case.

Clues lead straight to a certain Bartholomew Aelfrith, a vampire, whose sense of humor and tall blond good looks are enough to convince May he needs killing, even if he's not the killer. If he makes one more joke about her chop-sticks, she's going to stab him through the heart with one. The problem is, Bartholomew is probably the only person who can catch the real killer, so May has to put up with his insouciance and his wise-cracks, and his penchant for picking up strays of all kinds.

But if he says, "I've got a plan" one more time, she's going to scream.

Teaser:
May stepped outside and opened her umbrella. The burst of hail had changed to sporadic, slushy rain. It was a glowering, bitterly cold evening. Clouds moved sullenly across the dark sky.
From her street on the hill, she could see the river curving in its gentle S, the two bridges, Christmas Junction where the sky scrapers glittered, and downtown, where she could hopefully find a taxi. The clouds were so low that they hid the top half of the skyscrapers in Christmas Junction. A train, far in the distance, looked like a brightly lit caterpillar crossing the busy downtown area below.
The street she lived on was in a quiet residential neighborhood with old trees and a large park behind a tall, wrought-iron fence. The buildings, trees, and fence all leaned together, conspiring to keep the riffraff out. The sidewalk was clean and the cars lining the road gleamed. No riffraff here tonight … unless that shadow was up to no good.
May tilted her head to get a better look. In between two cars, on the opposite side of the street, huddled a shadow. The hair on the back of her neck prickled. Something was not quite right. The shadow was too small to be a human, but too large for a dog. It slid around to the far side of the car to hide as May drew even.
What was it hiding from? And what was it? May was curious. She closed her umbrella and hooked it over the fence on her left, and then she darted across the street and peered behind the car. Crouching near the rear bumper was a small, skinny boy.
“Hi there. Are you all right?” May started toward him.
He bared his fangs and hissed as she drew near.
May’s step faltered. A vampire child. An abomination! Who the hell had made him? The prickle of fear turned into a full blown shiver. Poor creature. Too young to fend for itself, but dangerous nonetheless. As soon as it realized its powers it would go on a killing spree, and nothing living could resist it. Slowly, she eased her hand into her purse to get her cellphone to call for backup.
“Don’t hurt me,” he whimpered, cowering against the car. His eyes were huge with panic. Blood on his neck and a wet, brown stain on his T-shirt showed he hadn’t changed his clothes since it had happened, and that it had been recent. That was a blessing, at least. The more recently he had been killed, the weaker he would be. She might be able to handle this on her own.
Staying well back, she examined him. He wore no jacket and one of his shoes, May noted, was missing. “I won’t hurt you. Where’s your other shoe?” It was best to stick to unimportant things. Or at least, things that seemed unimportant. At times like this, anything could be crucial. Anything could set him off. She had to be careful. A rogue vampire had made this creature, and its saliva was deadly for anything other than a full-blooded vampire.
“My shoe?” He glanced down at his foot and flinched. “I don’t know.” He looked back up at her, his eyes pleading now. “I don’t know. I woke up nearby, I think, in a park. I woke up when the hail hit my face. I don’t know where I am. I don’t know who I am. Can you help me? I should be cold …” His voice trailed off. “I’m dreaming. Is that it? Is this a dream?”
May nodded, forcing her lips into a smile. “Yes. It’s a dream.”
Poor creature. He’d been badly made, hastily made, and made against all the laws and rules that governed the vampire clan. Not that they had many rules, and not that they really cared. They followed the rules only because they feared the consequences of breaking them and not from any moral obligation. May moved very slowly, so as not to startle him into attacking her.
“I can help you,” she said, crouching in front of him. “It’s a strange dream, isn’t it? I can help you.”
“I just want to wake up.” His voice was hoarse and his fangs, sharp as needles, glittered with bloody saliva.
“All right.” May eased her hand into her purse. “I want you to stand up straight. That’s right. Now, close your eyes and say, ‘There’s no place like home.’ Say it three times, and you’ll wake up.”
“All right.” He nodded, pathetically glad to obey. He screwed his eyes shut. “There’s no place like home. There’s no place like home.”
May took careful aim and drove the stake through his heart.
“There’s no place like … home.” The creature opened its eyes, but they were empty and saw nothing now. He was so slight he fell like a ribbon to the sidewalk, landing without a sound. His bare foot pointed at the sky. It started to rain again, harder.

About the Author:
Jennifer Macaire lives in France with her husband, three children, & various dogs & horses. She loves cooking, eating French chocolate, growing herbs and flowering plants on her balcony, and playing golf. She grew up in upstate New York, Samoa, and the Virgin Islands. She graduated from St. Peter and Paul high school in St. Thomas and moved to NYC where she modeled for five years for Elite. She went to France and met her husband at the polo club. All that is true. But she mostly likes to make up stories.

Find Jennifer on the Web:

Directions:
- Mix honey, lemon juice, soy sauce, broth, chill sauce, lemon zest, garlic, ginger and set aside in a bowl.
- Heat the oil in a pan over medium-high heat, add the chicken and stir fry until cooked through and browned a bit.
- Add the asparagus and stir fry until it turns a brighter green, about 2 minutes.
- Add the honey, lemon juice mixture, stir
- Whisk the water with the corn starch, stir in to coat and cook until the sauce thickens, about a minute.

Serve over rice. (May likes to drink ginger beer with this, and finish up with lychees and her father's smoky moon-shadow tea.)