I’m excited to welcome Author Naomi Clarke on my blog. Naomi is here to share with us her latest release, Blood Witch.
*** 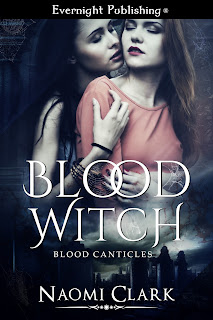 I don't often listen to music when I'm writing – mostly because I do a lot of my writing in my work place, and apparently a hospital food court is not the ideal location for blasting music in. But one thing I always do for my characters and books is set up a playlist on Spotify for songs that remind me of them. I listen to those lists on my commute to work, and it gets me in the right frame of mind for writing. A particular lyric will trigger something – a scene, an emotion, a bit of dialogue – that I just know will be perfect for a story. It's become an almost ritualistic part of my writing process.

I'm actually still working on the playlist for Lola and BLOOD WITCH, but there are a few songs I've already picked out as being crucial for the mood of Lola's world. Want to check them out?

Laura Marling – Devil's Resting Place – I love Laura Marling, but this song struck a particular chord, more for the mood it evokes than the song itself. It's dark and mysterious and hints at danger.

Holly Golightly – Devil Do – It's not a spoiler to say that devils and demons play a part in BLOOD WITCH. For that reason alone, this song has earned a place on the playlist.

AFI – Miss Murder – Look, if I ever leave AFI off a playlist, just assume I've been kidnapped by aliens and replaced by a pod person. I love AFI, and I never write a story without at least one of their songs in my mind. Miss Murder is the unofficial theme song for BLOOD WITCH.

Blood Witch Blurb: Lola Guntram is used to being an outcast. She's the only blood witch in Fort Rosser, mistrusted by other witches and happier working solo. But when her dark practices make her the prime suspect in a brutal murder investigation, she's forced to turn to others for help. Not that she has many allies – her ex-girlfriend thinks Lola is the killer, and the local coven leader thinks Lola will corrupt them all if she gets too close.

Help comes in an expected – and alluring – form. Tristesse is a demon on the run, beautiful, enigmatic, and suspiciously keen to assist Lola while she chases down the real killer. How can Lola refuse? With the police breathing down her neck, accusations flying, and inhuman monsters on the streets, Lola needs all the help she can get. The killer is angry, desperate, and determined. But so is Lola Guntram. And she doesn't care how dark or bloody the magic has to get – she's going to stop them.

Excerpt:
There was probably never a good time to have the police knock on your door, Lola reflected. But three am on a September morning was definitely one of the worst. The fog outside seeped into the house with the stone-faced detectives, and the brisk chill of the night sank into Lola's bones. She'd only been home a couple of hours; only just stripped off and gone to bed. Now, huddled in her ancient rocking chair by the embers of a dying fire, she didn't feel as exhausted as she should. She felt like someone had stuck a live wire up her ass.

“I know this can't be good news,” she addressed the female detective, who introduced herself simply as 'Hardy.' “So you'd better just get on with it.”

Hardy, a brunette who did look exhausted, raised an eyebrow. “What makes you so sure it's not good news, Miss Guntram?”

Lola tried a smile. “Do the cops ever show up after midnight with good news?”

Her partner, Scherer, looked fresher. He sat on the edge of his seat like he might spring up any second, but he smiled back. It wasn't an entirely happy expression. “You caught us out, Miss Guntram. This isn't a social call.”

“Then don't drag it out,” Lola said. His nervous energy was infectious.

They exchanged a knowing look. “Where were you between ten and midnight tonight?” he asked.

The blunt question created a knot of dread in her stomach and she had to swallow hard before she answering. “Working. I was with a client. Why?”

Hardy fixed cold blue eyes on her. It was a searching look, penetrating. If Lola didn't know better, she'd wonder if the detective was trying to probe her psychically. But both detectives felt like nulls to her sharp senses. “Can you prove that?” she asked.

Irritation mixed with the dread. “Yes, of course. I have a diary in my office and you can call the client – although she probably isn't going to be any happier to hear from you than I am. What's this about?”

Scherer couldn't quite manage Hardy's gimlet gaze, but his half-smile had disappeared. “What exactly is your job, Miss Guntram?”

Lola shifted in the rocking chair, wishing she could cover herself with the blanket she sat on. But it would make her look vulnerable and she had a distinct feeling that wouldn't do her any favors.  She settled for tightening the belt on her robe and pushing her shoulders back. Three years of childhood ballet lessons had taught her that good posture always created a good impression.

“I'm a spiritual consultant. I help clients with difficult decisions, life choices, with emotional and psychological problems.” That was an edited, socially-acceptable answer. Lola wasn't about to get into witchcraft and spellcasting. She rubbed her wrists absently, glad her robe had long sleeves that hid the scars on her arms.

Scherer sneered at her answer, making her doubly glad she'd given the short version. “So you're a New Age guru or something? Separating the gullible from their money?”

“Yes, I'd love it if we could stay on track,” Lola snapped. “Maybe we can start with you telling me what this is about? It's late, I'm tired, I have an early start -”

“Why does 'spiritual consulting' take place so late at night?” Hardy asked. “That strikes me as odd, Miss Guntram.”

The sound of her own surname was starting to grate on Lola. “It's a new moon tonight. Very good for certain practices.”  Were they ever going to get to the fucking point? She couldn't think of a single thing she'd done that would bring them to her door, and it felt like she'd never find out at this rate.

“So if we checked with your client, they would confirm you were nowhere near the Red Lotus tonight?” Hardy asked.

Lola blinked. “The Red Lotus? No, of course not. Why would I be there?” The idea was so laughable, she almost forgot her nerves and irritation for a second. The Red Lotus was a pretty exclusive S&M club – members only, sky-high fees, that kind of thing. It was also owned and managed by Lola's ex-girlfriend. Even if she'd been into the kink that the Red Lotus offered, Lola could never have gone there. It would have been mortifying. She felt herself blushing at the very thought.

“Well, you tell us, Miss Guntram.” Hardy leaned forward again, resting her elbows on her knees and clasping her hands under her chin. The movement put her face in shadow, with the room only lit by a soft peachy lamp, and Lola was struck by the thought that Hardy would be beautiful if she didn't look so tense and tired. “You see, a woman was found dead there tonight.”

Lola's heart jumped, then plummeted. “A woman? Not Rowan?” Her voice squeaked and she covered her mouth as if she could recover the sound.

“Ms Morgan is fine,” Scherer said. Lola felt some of her dread drain away.

“She is the reason we're here, however,” Hardy said. “She seems quite sure you're responsible for the killing, you see.”

About the Author:
Naomi likes writing, perfume, fancy tea, and unfathomable monsters from the dark spaces between the stars, not necessarily in that order. She has been writing stories ever since she learned how to write, but is still trying to master the art of biography writing. When she's not dealing with werewolves, demons, or sea monsters, she's hanging out with her cat and probably watching a documentary about Bigfoot. If the cat isn't available, she's with her fiancé watching cookery shows and silently plotting her next book.