Book Spotlight: Bad Larry and the Divorcee by M.Levesque

Today, I'm happy to welcome Author M. Levesque to my blog. She's here today to share with us a peek preview of her release, Bad Larry and the Divorcee. 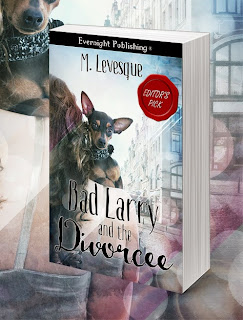 Chapter One
Mexican Hair Remover
This was my first official outing since the divorce. A former classmate died the week before and my class of seventy-four was holding a memorial service in our local Knights of Columbus hall.
I normally didn’t go to these things, since high school hadn’t exactly been the time of my life. I’d known very little about the guy who died, beyond one date at the movies that ended abruptly when I’d assaulted him with candy but I was sick of hiding in my run down crappy apartment just thinking about my ex-husband and his shiny new girlfriend.
To be quite honest I’m not great with death in general but I’m not really great with life either. So, unlike the majority of people going up to speak a few words about their memories of a guy very few of them really knew, I sat quietly in the back, next to my best friend from high school. I thought about the time the deceased and I went out for a movie and he behaved himself after nearly being concussed by a king sized Charleston chew. This apparently classified him as being nice, so I thought nice thoughts about David Bogs, the nice guy that I went on a date with, that one time.
I was currently sporting my favorite little black dress, which only fit again because when one gets a divorce you not only lose your dream house, half your stuff, your pride, your faith in the opposite sex and all of your couple friends, but you also lose a few pounds in the process of having your heart ripped out and set on fire.

…or wherever ebooks are sold.
10% of author profits for Bad Larry and the Divorcee will be donated to animal rescue!
For updates on this and more please follow my blog at www.authoraddisonlockwood.wordpress.com
Newer Post Older Post