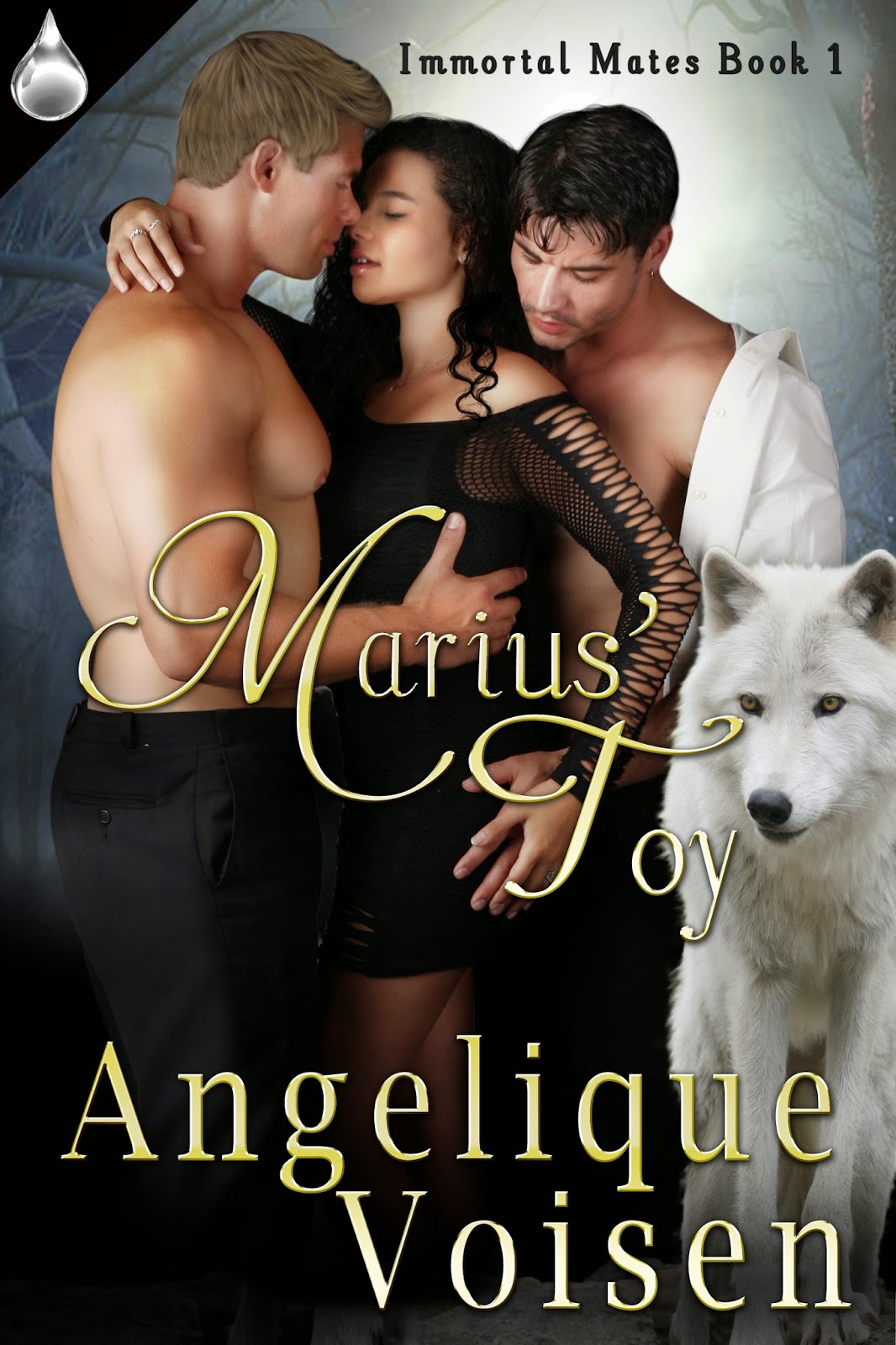 After centuries of bloodshed, Clan Romulus, the most powerful werewolf clan in modern Rome, has finally emerged victorious in the war against their rival pack. As  Romulus’s second-in-command, Marius only believes in two ironclad rules—protect his mate and uphold the honor of his pack. When his mate, Julius, rescues an injured and weak female shifter, it brings out the fierce and dominant urges in Marius. However, Siena Cole brings her share of problems. The werewolf who turned her is a member of Marius’s enemy pack, and if Marius and Julius want to claim her as their own, they risk re-igniting the war between the wolves of Rome.

The night wind whispered and the wolves of Rome listened.

The moon swelled above them, clear, bright, and beckoning. During the day, Rome belonged to the two-legged mortal denizens of the Eternal City, but nights were always theirs.

No man-made vehicle glided across the timeworn cobblestone streets, and establishments, homes and hotels were shuttered for the night. The mortal world knew, deep within their subconscious minds, what could happen to them if they ventured into the night without invitation. The foolish and curious ended up like their ancestors—as dinner.

Dark shapes slithered from the dark nooks and crannies like parasites, from the ruins of the Appian Way, beneath the crumbling Coliseum, and the old Palantine Hill where the Roman Forum now sat. Unbeknownst to mortals, an entirely different world existed in their city—a world ruled by two enemy werewolf clans, Clan Remus and Clan Romulus.

Marius wasn’t yet alive when Romulus, the leader of his clan and father of all wolves, and Remus, Romulus’ twin, were given the wolf gift by the gods. He only knew the stories. The bastard offspring of a nameless wayward Greek goddess and her mortal lover, the twins had been left to die and saved by a great she-wolf spirit who raised them as her own cubs. Some said the she-wolf was a goddess in disguise, others named it a demon. Whatever her ancestry, she bestowed the gift of shape shifting to the twins and forever changed the world.

Every werewolf worth their salt knew a little about the long and bloodthirsty history between the two brothers who ruled Rome. Marius, Romulus’ second-in-command, had been by his alpha’s side since the height of the Roman Empire in 264 B.C. Desiring the same mortal woman had sparked the initial strife between the two brothers, but even now, four centuries after her death, the hatred between them continued to fester.

Tonight though, that war would finally come to an end.

Marius ran at the head of the pack alongside his alpha, enjoying the feel of the wind against his coat. More and more members of the pack fell in ranks behind him, forming a deadly train.

The Piazza della Rotonda was crowded by the time they arrived. Snarls, yips, and growls of challenge from the rival pack were directed at them, but they ignored the wolves of Clan Remus.

For this night alone, both alphas had agreed to a non-aggression pact, and it would be enforced until the end of the duel. Restless and newly changed wolves argued against their alpha fighting on their behalf, but they could not comprehend self-preservation. In the supernatural shifter community, werewolves had always been the dominant animal group, but if no semblance of order was maintained, then their numbers would dwindle.

The leaders of both clans would meet at the turn of every century, right when the fighting between the two groups became too thick and they had lost too many. Romulus and Remus would fight for the coveted seat—the right to be the head of the shifter council of the supernatural community. Whoever won spoke on behalf of all the wolves. The loser would concede to the winner’s demands and maintain order within his own pack. If anyone disturbed the peace, then he would have to face the wrath of his own alpha and his own pack.

Gods. What Marius would give to experience an entire century of peace. While the duel wouldn’t completely end the hostilities between the two packs, some understanding was enforced.

Romulus had racked up three consecutive wins over three centuries, and Marius doubted he would lose his seat of power. Clan Remus would have to slink back to their underground hideaways after tonight.

The lesser members of the pack stopped outside the building, and let the more powerful wolves trot into the agreed-upon dueling grounds. Marius, as beta, fell to Romulus’ left flank. The twins Octavius and Octavia, the pack’s gammas, fell to his right. Together, the four of them entered the Pantheon.

Marius sensed the tension from the twins. They hadn’t been with Romulus as long as he had, but he trusted them without question. If things got out of hand, he knew they’d give their lives without hesitation to ensure Romulus’ safety.

The Pantheon was a shadow of its former self. In the olden days, no cracks marred the roman columns holding the old monolith up. Marius could still smell the tourists who’d mindlessly traversed and gaped stupidly at the temple’s interior during the day. Inside the Pantheon, light fell from the dome above, highlighting their ancient enemy.

Like Romulus, Remus was larger than the average werewolf, leaner and long-limbed, made for the primal hunt. The twins were opposites in everything, right down to their coloring; Romulus with his pure snow-white coat and Remus with his black-as-night fur.

“Welcome, Lord Romulus, we have been expecting you.”

The speaker was an attractive and nude she-wolf in human form. Her pale, unmarked skin shone in the moonlight and wavy dark curls rippled across her back. Her eyes were a wolfish amber.

Aurelia. One of Remus’ more powerful wolves. She was one of the few werewolves there in human form, and her humanity was a not-so-subtle show of power. Since changing shape was a long and painful process for new and weaker wolves, Aurelia was flaunting her ability to effortlessly shift if it came to a fight.

Marius loped forward and shifted. Changing to human form was folly if events spiraled out of control, but he wouldn’t lose face by refusing to change. How he hated the politics and games he had to endure as beta.

“We have done this many times before, Aurelia. Let us dispense with the pleasantries and start the duel.”

Aurelia inclined her head and continued reciting the code of duels all werewolves knew by heart. Pack alphas could add their own rules to the code, but the main principles remained the same.

“Let this duel decide which clan the gods favor to lead the werewolf packs in Rome for the next century.” When Aurelia finished, the more powerful wolves of both clans formed a loose circle.

The two alphas circled each other warily. There were no sudden resounding howls and reckless moves. Both brothers had been doing this dance for centuries. Remus lunged first, and Romulus stepped aside to avoid his claws.

The dance of the two large alphas was savage, deadly and in some ways, beautiful. Their dance called to the baser primal instincts in all of their children, as Marius and the rest were literally of their bloodline.

Like the last three centuries before, the dance ended in Remus’ defeat, although it was a close call. Romulus howled his triumph atop his brother’s bleeding form. Marius and the other wolves of Clan Romulus joined with their alpha in celebration.

They let Remus’ beta and gamma help him out of the Pantheon, then Clan Remus slinked out of the piazza, their furry heads bowed in defeat. Not all of them left with their defeated alpha. Some wolves stayed, indicating the shift in their alliance. Marius didn’t trust these wolves, but numbers were always welcome.

The rest of the clan stayed on, celebrating their alpha’s victory with food, drink and midnight matings. They had anticipated Romulus’ win, and had brought the supplies beforehand.

“Cheers, beta!” One drunk werewolf offered him a bottle of wine, but Marius politely declined.

The night air felt cool against Marius’ human skin as he walked around in search of his mate. Werewolves in human form were writhing, clawing, and mating each other with reckless abandon. Under the sway of the full moon, nothing mattered except the touch of bare flesh. Marius said a short prayer to the fertility gods for future wolf cubs to keep their bloodline healthy.

Marius felt his own cock rise at the sight of two males mounting a willing female against the fountain’s edge. Where was Julius anyway?

The last few days had been tense and wrought with tension and he was glad it was over. Clan Romulus would continue being the pillar of the shifter community, while Clan Remus continued to wither in the underworld. All was right with the world.

“Octavius, have you seen Julius?” Marius asked. The gamma was one of the males sharing the female with another male by the fountain.

“My brother seems busy, have you tried the back streets?” Octavia asked.

She was a twin reflection of her brother, a slender golden-haired, golden skin and hazel-eyed goddess in human form. Their personalities sharply contrasted, though. She was the voice of reason in their pack meetings, while her twin favored a more direct and aggressive approach.

Marius’ relationship with the twins over the centuries was hard to define. He was equal parts their father, mentor, and their comrade. Long ago, Romulus had taken pity on a pair of dying slave children and given them the gift. Romulus and Marius practically raised them as their own offspring. Seeing them grow up to be more than capable pack leaders made him proud.

“You’re not partaking in the celebrations, Octavia?”

She directed a disapproving glance at her brother. “At least one of us has to be alert. Romulus is off rutting three or four females inside the Pantheon and I’ve told Galen and Valentine to keep watch.”

Marius nodded in approval. Galen and Valen were longtime enforcers of the pack he trusted. “Should we do a brief sweep?”

Octavia surprised him by patting him on the shoulder. “I have this under control. Go find Julius. It’s your turn to relax after staying by Romulus’ side the past few days. I’ll make the rounds with some of our wolves to make sure the mortal population doesn’t complain.”

“Thank you, be sure to switch with other enforcers later on or you’ll miss out on all the fun.” Marius took leave of Octavia and continued his search for his mate.

He shifted back to wolf and loped to the back alleys behind the Pantheon so he could find Julius faster. His nose twitched at the scent of freshly spilled blood carried on the wind, accompanied by the familiar scent of Julius. More faint animal noises followed. A hair-raising howl of challenge resounded somewhere nearby and it was answered by more growls.