Book Spotlight: Through Her Eyes by Amber Morgan

Today, I'm happy to welcome Author Amber Morgan on my blog. Amber is here to share with us her latest release, Through Her Eyes. 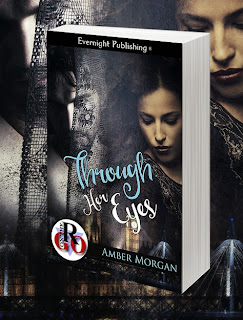 Between submitting Through Her Eyes for publication and completing the final edits, I found myself reading a lot of true crime books. Lots of stuff on criminal profiling, unsolved cases, and serial killers. It was coincidence, but it was also great timing when the edits came in! I didn't want to make the story procedural-heavy, but as the hero, Dom, is a police detective, I think I was able to make him a little more real by working in some of the facts I'd picked up. I was also able to flesh out the villain of the story by adding in little behavioural cues based on real-life serial killers. I didn't want to shoehorn anything in, like “look at me, I read some stuff!!!”, but hopefully the extras I did squeeze in help to build the tension and chills in the story!

Blurb:
Six years ago, Keira nearly died at the hands of a serial killer. The experience left her with more than just physical scars. She was psychically linked to the killer, a helpless witness to all his crimes. Now the man known as the Shoreditch Slasher has killed again, and Keira is dragged right back into his path. Detective Dom Abbott believes Keira's link to the killer will help the police finally catch him, even if it means putting the woman he loves in danger. With Dom to protect her, Keira is willing to risk almost anything...But where will her strange gift lead her?

Excerpt:
His intentions were fiercely clear when he kissed her.
She gasped into his mouth, thrilled by the heat of his kiss. He knotted one hand in her hair, forcing her head back. At the same time, he backed her against the wall, pinning her in place while he devoured her mouth with his, forceful and almost painfully demanding. She moaned, a mixture of pleasure and pain. His touch, his kiss, his hands... It was all exquisite, but this position – forced against the wall, held firm by a powerful man... It stirred dark memories.
Dom must have sensed her inner turmoil, because he broke the kiss, stepping back with a groan. "Dammit, Keira—"
"I don't want you to stop," she said quickly, afraid he'd end things before they'd even begun.
"I'm not bloody stopping." He gripped her shoulders, pulling her in close. "Believe me, I'm not. But all the times I imagined fucking you, Keira Swanson, I never once imagined doing it in my front room with a half-eaten pizza at our feet."
She laughed, heart hammering and making her feel bold and reckless. "How did you imagine it?"
"All kinds of ways." He traced her lips with his finger. "Rough, slow, in silk sheets, in the shower, with blindfolds, strawberries, ice cubes, handcuffs..." He ground against her and nipped her earlobe. Keira shivered in delight, pressing back against him. "Drove myself mad imagining all the things we could do. But pizza boxes were definitely never involved."
She shivered pleasurably, electricity seeming to zip between her clit and her nipples at his words and his touch. She'd imagined it too – all those scenarios and countless more, and the thought of actually doing it was as surreal as any outer-body experience. It made her fears about initiating intimacy fall away. Dom wanted her. It was plain in every line of his body, in the way he pushed his hips against her, the way he stared at her so hungrily. She didn't need to wonder how to do this. It would be as natural as breathing.

Author Bio and Links:
Amber is the secret identity of a writer who normally pens urban fantasy, but feels like stretching her wings. Amber loves darker romance, anti-heroes, good red wine, and expensive chocolate (sometimes all at once). She's based in the UK and lives in an adorable cottage with her dream man and a demanding cat.