Book Spotlight: Her One and Only Dom by Tamsin Baker

I'm happy to welcome Author Tamsin Baker on my blog. Tamsin is here to share with us her latest release, Her One and Only Dom. 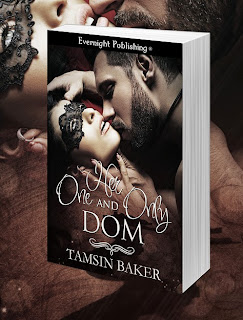 Her One and Only Dom
By Tamsin Baker

Blurb:
Simone graduated from university with three important things: her degree, her virginity still intact, and a case of unrequited love to make life complete. Her professor, Patrick Smythe is everything she wants in a man.

Patrick has never found a woman who can fulfil all of his needs in and out of the bedroom. Simone wants to be this woman, but can she succeed when they come from such different worlds?

Excerpt:
A leather clad woman walked past them with a man on a leash and Simone’s mouth gaped open. She tried to speak and just couldn’t. She was both horrified and aroused. Heat pooled between her legs as she watched them walk away. She wanted to be cherished by someone like that. Her eyes slid up and down the people in front of her, her jaw clenching as she rejected the idea of being restricted in such a way.

The woman slid her hand over the man’s hair and tilted his face up to look at him, bending down to drop a kiss on his lips. Her eyebrows rose at the tender gesture. So maybe she didn’t want a leash and a collar, but to be loved and trusted like that would be a wonderful thing.

What was the question again? Oh yeah. “Because he didn’t want me.”

Nicola snorted inelegantly as she leaned against the black wall. “You don’t know that.”

Simone narrowed her eyes at her best friend. How would Nicola know? They’d never really talked about it.

“I do. He told me I was too innocent for someone like him. He obviously thought a virgin soon-to-be ex-student was too pitiful.”

Tears sprang to her eyes and she swallowed down the lump that had risen in her throat. When she had approached Professor Patrick Smythe at her graduation, half-intoxicated with champagne, he had turned her down flat. She had dismissed it at the time, but later she had been horrified. His rejection had sent her diving under the covers with a box of chocolates for a week.

Nicola stepped closer and slipped her warm, soft hand into Simone’s. It was reassuring and kind, reminding Simone how much she missed her friend. Between full-time work, paying bills, family commitments and keeping house, she didn’t make time to just hang out with her friends anymore. Growing up sucked sometimes.

Rhythmic tribal music was playing softly in the background and Simone found herself focusing on it as Nicola tightened her hold on her hand.

“That wasn’t the reason at all. Come with me.”

Simone’s head came up with a start and she yelped as Nicola dragged her down the hall. Where were they going now? People were everywhere, milling around a large common area with a bar and lounges. Some were standing, others were kneeling. Just about everyone was wearing leather and had piercings of some sort. One woman had what looked a type of corset on her back. The rings were piercing her skin and a black ribbon ran through them like an old fashioned corset would. It looked beautiful, though painful.

There were more red doors off the room and screams of pleasure and pain echoed throughout the club over the music. Simone flushed again and dropped her eyes. She may as well have painted “first timer” on her forehead. Ever since she had read Fifty Shades of Grey, she had been intrigued by the lifestyle, but that didn’t mean she was ready to experience it. When she had mentioned it to Nic in the course of conversation, her friend had promised to take her to a BDSM club she knew of. Never in her wildest dreams did Simone think Nic would actually do it.

Her breath caught in her throat, making her gasp. What was she doing here?

“Come on sweetie,” Nicola urged. “I really need to show you something.”

Simone tugged down the black top she had worn over black pants. Nicola had told her not to display her boobs or her knees, and to wear all black. She was there to blend into the walls, as though Simone needed to be told that. Blending in to the background was her way of life.

“Where are we going?”

Nicola grabbed her hand and tugged. “A man’s doing a scene that you just have to see.”

Simone frowned, perverse excitement and downright terror fighting each other for supremacy in her head. Her heart rate had almost doubled and a fine sheen of sweat covered her face and the back of her neck. Fear of the unknown may have won out if it weren’t for the reassuring press of her best friend’s hand in hers.

Nicola stepped over to one of the red doors and opened it. At once a wave of heat hit Simone’s face, reminding her of an intense summer’s day. The room was darker than the foyer and she blinked a few times, waiting for her eyes to adjust to the dim light.

When she could finally see well enough, she looked up to see why Nicola had been so insistent that they come into this particular room. Heat flooded her entire body, followed by a cold flush as a gasp escaped her. The man, who was the main focus of the room, was Patrick. Her ex-professor wore tight leather pants that clung to him in an almost indecent way. He was shirtless and had what looked like a flogger in his hand. He looked in control, powerful and magnificent.