I'm happy to welcome Author Raven McAllan on my blog. Raven is here today to share with us her latest release, The Contract.

Thank you for inviting me to come onto your blog.
Living in Scotland where summer can be one day in May, and the midges rule from June to September, give me somewhere warm any day. After all mozzies respond to repellent, I swear midges thumb their noses up at it.
I love to travel, and I like setting my books in places I know, so I guess it was inevitable that as I sat by a pool in Barbados I got the idea for this book. (Lot's of 'I's' in there, ooops, sorry.)
Hubby got used to me saying, stop the car while I take a photo, as we drove around, and then scribbling in a notebook, things I didn't want to forget.
The upshot, is The Contract, now released by Evernight Publishing.

Blurb:
Walking out of her job was the best thing Nikki Plummer ever did. What she didn't expect however, was to be tracked down by some hot bod, claiming she owed him.
Ruari Cameron has come to collect what he has paid for, but one look at Nikki, and there's only one thing he wants. Her in every facet of his life.
Of course convincing Nikki of this might take some doing...but he's more than ready to rise to the occasion.
Will they find their happy ever after under the Barbados sun?

This is how she got there…

Teaser:
"Plum."
"Go away, I'm not listening." Nikki Plummer, often called Plum and she hated it, finished emptying her head-high cupboard and slammed the door—hard. Her boss moved back in a hurry to avoid her toes, knees, designer shoes, and anything else in the vicinity being pinched between the door and the jamb. Her numerous bracelets jangled as she did so, and seemed to add their displeasure to the wearer's.
"Plum, don't be silly, it was a mistake."
There it was again. Did the stupid woman have no sense whatsoever? Plum was for signing her work, nothing else. Sheesh, she'd told everyone often enough, and most people accepted it.
Not this one.
The noise of a stiletto tapping impatiently on the parquet flooring only firmed Nikki's mind up. Her boss could go to hell. The hard way. On her Manolos.
"No." No to whatever you want. It's over.
"You're overreacting, like I said it’s all a silly mistake." There was a definite note of panic in the voice now. "Plum, stop it and listen to me."
Yeah, yours you bitch.
"No one called Plum around here." Nikki checked her desk drawer. She removed three pens, a diary, and her hot as Hades red lipstick and threw them in her kitchen sink-sized bag. Satisfied there was nothing more lurking in a corner, she grabbed her sprint from the underground—fondly known as The Clockwork Orange—ballet flats and stood up. Anything else? Not that she wanted or needed anyway. The rest of the stuff came with the job and could stay with it.
The feeling, the glorious feeling of liberation kicked in. Nikki zipped her bag and put on her jacket.
"Nikki, for god's sake stop this nonsense." The voice rose to a screech just one notch short of shattering glass. The panic in it was evident. "Stop being a drama queen and vying for notice." The other five or six people in the office gave up their pretense of not earwigging and listened openly.
Nikki winced at the shrill tone. "No one could ever even think of vying for attention, Geraldine, in here," she said calmly, knowing her even note and lack of concern would infuriate the other woman. "Yours or anyone else's. You command the field in that respect, even down to your own attention, weird though it sounds. Luckily I neither want nor need it. Not now. You fired me, I'm out of here."
Geraldine Butters stared at her. "I was joking."
At the back of the room someone coughed, 'bullshit'.
"You should know I didn't mean what I said. It was said in jest." Now the voice was full of panic. "Take off your jacket, put down your bag and get on with that project. I need it by the end of the month. Only you can do it."
Now we're getting to the crux of the matter. The project, whatever it is and your lack of ability. Well tough. Too bad, that's one joke that misfired on you then.
"Don’t care, too late, goodbye."
"You little bitch, you'll pay for this. I gave you a job, I sorted your mess…"
That was the last straw. Nikki picked up the waste paper basket, full of sweet wrappers, old take away coffee cups as well as torn bits of paper, old train tickets, and all the detritus of a busy office and upended it over Geraldine's head.
Buy Links: www.evernightpublishing.com/the-contract-by-raven-mcallan 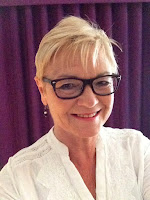 A multi-published, best selling author of erotic romance, Raven lives in Scotland, along with her husband, in a house much too big for them—their children having flown the nest—surrounded by beautiful scenery, which inspires a lot of the settings in her books.
>She is used to sharing her life with the occasional deer, red squirrel, and lost tourist, to say nothing of the scourge of Scotland—the midge. As once she is writing she is oblivious to everything else, her lovely long-suffering husband is learning to love the dust bunnies, work the Aga, and be on stand-by with a glass of wine.