I'm happy to welcome fellow Evernight Author, J.J. Lore on my blog today. J.J. is here to share with us her latest release, Footwear and Fantasy. 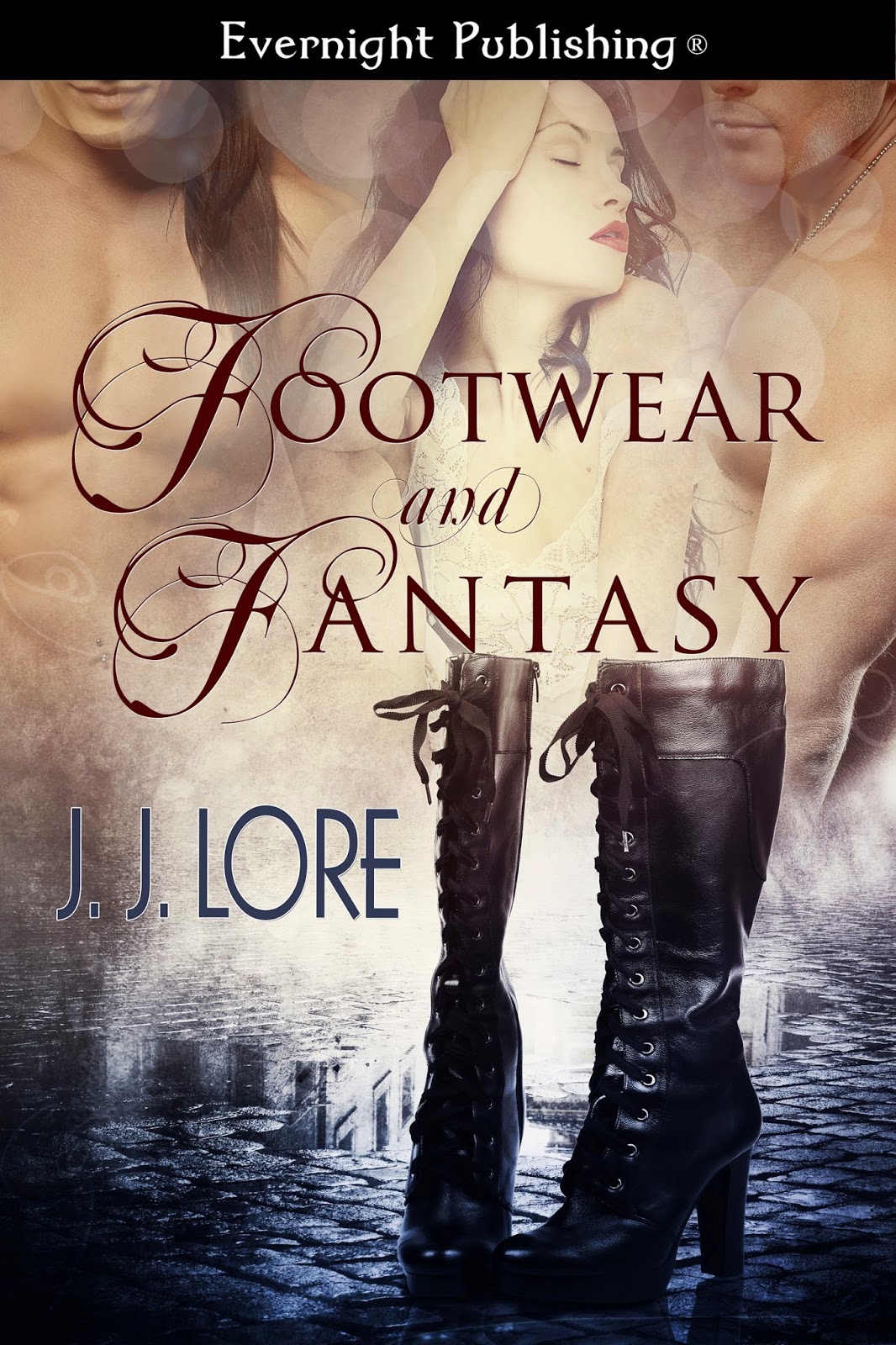 Blurb:
Hanna Bregot is struggling to make a go of her ailing father’s cobbler shop, but the residents of her town regard a woman shoemaker as an oddity. At the end of the day, she can’t even summon the energy to repair her tattered slippers, let alone earn enough to feed herself or her cat.

Elf companions Lear and Garrin like to mingle among humans, but always in disguise. When they notice a poor cobbler crying over her shoes one evening, they immediately decide to intervene and give her a gift in the hopes of lifting her spirits.

What starts out as simple kindness soon morphs into a sensual game the three want to play forever. But when the Queen of the Elves discovers their love, it becomes a matter of magic versus mundane in a life or death decision.

Excerpt:
A gasping noise interrupted his thoughts and he and Lear turned toward the sound, alert to any threat. Rather than facing an intruding thief, instead they confronted a blinking Hanna crouched on the stairs. She was clad in a thin chemise, her bare feet and ankles peeping out from under the frayed hem as she tottered on an upper step, her thin hand grasping the rail. Her pink lips parted wordlessly as she glanced between the two of them. For a long moment, Garrin found himself wondering what she saw. Neither he nor his mate had bothered to assume a human veil, so she was now seeing elven men for what had to be the first time in her life. He knew he was ruggedly built by his race’s standards, where Lear aligned more closely to the slim, lithe ideal. They both had brown hair grown long and pulled back in a hank. His was thick and dark while Lear’s was more auburn and smooth. Of course, their pointed ears and sharper features were likely the first things she’d notice, alerting her to the presence of magical beings in her shop.

“You’re…you’re…” Hanna’s soft voice trembled and before he realized what he was about, Garrin found himself rising, ready to assist. Her blue eyes widened as she took him in and her eyelids fluttered. Like a felled sapling she slumped, crumpling on the stairs in a swoon. She would have tumbled down the last remaining few if he hadn’t gathered her up in his arms. Her warm weight was a welcome burden and he allowed himself the pleasure of looking over her body, taking in the swells of her breasts pressing against the thin fabric of her gown, the curved collarbone and hollow at the base of her throat revealed by the garment’s disarray. Her dark brown lashes fluttered against her pale skin as she roused and he couldn’t help but draw in a deep breath to capture her sweet, musky scent while he could.

Lear crouched at her side, running his fingers along the soft skin of her wrist, his gaze never leaving her face.

“Should we return her to bed, do you think?” Garrin tried to keep his voice low so as to not startle her, but she flinched and blinked her eyes instead. Her gaze flew to his, her deep blue eyes wide with confusion as she pressed her hands to his chest as if to push away. He tightened his grip instinctively, something about their physical closeness pulling him to her in an immediate and primal way. Her muscles stiffened in response and at that slight friction against his body, his prong thrummed to life, affirming that indeed he wished to have this woman.

“What are you? Why are you in my shop?” Her voice quavered and her eyes brightened with imminent tears. “Please don’t hurt me.”

Garrin took in an aghast breath. She was frightened of them? To be fair, they were trespassing, but they were attempting to do a good deed and had certainly never contemplated sneaking up to observe her as she slept. Or at least he hadn’t until the thought occurred.

“We won’t hurt you.” Lear’s voice went quiet and soothing, but the woman shook her head in denial. Her limbs quivered as if she longed to escape.

“We aimed to help you, mistress, only that.” Garrin knew that wasn’t quite the whole truth but better to reassure her than reveal he and his mate harbored lustful thoughts toward her. To ease her stress he invoked a small glamour over her, a mere shadow of reassurance and charm.

“But…but…what are you? You aren’t like any men I’ve seen before. Are you from one of the northern kingdoms?” Hanna blinked and attempted to sit up, somehow managing to position herself on Garrin’s lap. His thickened prong approved of the soft buttocks pressed to it. Her expression was sleep softened and gentle, not tense and frightened like before.

“In a manner of speaking,” Lear agreed with her but went still as she reached out one work-worn hand to almost touch the flared point of his ear.

“Was that an injury? How could that be? You both have them.” Her tone went from speculative to confused. Her whole body flinched against his, and Garrin longed for her to move like that when he had his thick prong pressed tight inside her body. However, it seemed there were quite a few impediments to overcome before that scenario would come to pass.

“You aren’t human, are you?” Now she did pull away in earnest, somehow able to overcome the little spell he’d sent her way.

Lear reached out to her cheek and whispered something under his breath and she quieted again, gently shaking her head even as she subsided against Garrin’s shoulder.

“We’re elves.” Garrin believed direct was best, especially when she was somewhat impaired by magic. She moaned low in her throat and Lear again reached for her, smoothing his fingers along her wrists.

“But you don’t exist. The old stories are mere fables and tales. The devil has pointed ears like yours. Or a demon. The cleric says minions of hell can come to steal us away underground where you use us cruelly.”

Garrin wondered what the cleric’s reaction would be if an orc shambled through his church in the middle of a service, or dwarves tunneled out of the vestry floor. As always, the legends and tales of humans cast magical folk as the enemy and blamed them for all the troubles that befell them.

“We aren’t devils or even particularly mean.” Lear smiled at her and she tentatively returned it. How much of her agreeability was due to genuine feeling or the glamour, Garrin couldn’t guess, but the main point was she was calm. “Merely different.”

Hanna raised her hands in the air and shifted her legs, clearly attempting to rise, but Garrin wanted to hold her fast. She might stumble and he would not care to see her injure herself.

“You need to let me go. You need to leave my home,” she declared as she wrenched herself free and tottered between them. Her gaze fell on the boots gleaming like night, and her eyes widened again. “What…are those for me?”

“Yes, Mistress Hanna.” Lear stood from his crouch and reached for the boots, holding them out as the silken laces trailed down.

“This defies all explanation. Mythical creatures in my shop, making me beautiful things.” Hanna’s voice trailed off as she accepted the boots and ran her fingertips along the stitched seams, her hair loosening from the plait down her back. “I should be afraid, screaming for the constable, but I’m not. Why?”

Garrin cleared his throat, sure he didn’t want to tell her the reason.

“We mean you no harm, so there’s no need to be afraid.” Lear nodded encouragingly at her. “Would you care to try them on?”

He knelt at her feet, a supplicant searching for her approval. Abandoning all pretense of aloofness, Garrin joined him, needing to touch her again. He no longer cared about the potentially grave consequences of interacting with her. He craved this sweet-smelling human as he craved wooded glens and waterfalls.