Today, I'm happy to welcome fellow Evernight Author D. Martin on my blog. D. is here to share with us her latest release, The Dark Places.
*** 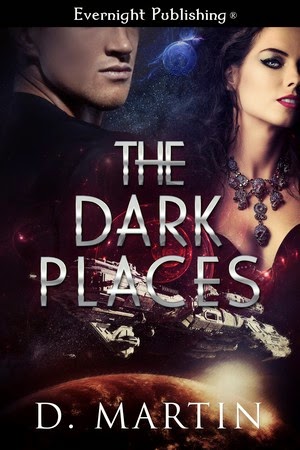 Book Description:
Kailiri Summers narrowly escaped an arranged marriage by fleeing to another planet. She has artistic ambitions, but life isn’t cooperating. Bartending seemed like a good option to stay afloat. She thought her future bleak until Matt Lorins walked into her bar.

One dinner with the charming and wealthy space trader binds her into a passionate marriage bargain. But he’s a man surrounded by mysteries that she can’t unravel. It's while she's traveling alone with him on his star ship, isolated far beyond all help, that he reveals a terrifying secret. She must choose between battling the darkness—or losing Matt forever.

Matt secured additional manual locks on the door and studied me with a slow smile. “We have only a few hours here, doll, before we have to get you to your place to pack up before we leave Harnaru.”
I started to say something—probably something witless or combative—but Matt pulled me into his arms. His lips sought mine while his hand roved with possessive assurance over my body. I couldn’t form a single lucid thought. Frost crept along my skin, and the shivering returned. Matt pressed me closer to his body, and I grew very conscious of his arousal. I no longer thought about escape. If this was a dream, I willed it to continue.
His caresses stroked along my lower back, continuing to soothe away my inhibitions. My shivering subsided, but the deep chill didn’t go away. Despite that, my arms encircled Matt’s hard waist, and I burrowed my body into his solid frame, determined to pursue my attraction to this puzzling but compelling man.
Why did he marry me?
The thought haunted me as my mouth opened beneath his insistent pressure. Our tongues touched in silken sensuousness that pulled at my core and left me breathless. His tongue slipped across mine and overrode my doubts about the immediate future. I wanted him to claim more of me. Our heated kisses created melting dampness between my legs. But the nagging chill chasing through me and along my skin persisted, though his arms crushed me close to his warmth.
Matt scooped me up in his arms and carried me to the wide, waiting bed, with its dark maroon satin coverlet. I submitted to the sublime experience of an attractive man undressing me. He patiently peeled away my boots, sockettes, and coveralls with minimum assistance from me, leaving me clad only in a dark blue silken camisole and very scanty matching briefs.
I’d absolutely no idea that I would be getting married that night when my frantic hands snatched this particular set of silky undergarments—fortuitously situated atop the clean linen pile—in my mad scramble to dress for work. At least these were sexier than my normal staid white cottons. Finally—you got something right, Kailiri! My lips curved in self-congratulatory smile, and I wondered if Matt appreciated them.
He removed only his tunic. I glimpsed an intriguing swirling pattern of dark hair above his navel and pant’s waistband before he laid his nicely muscled, tanned torso beside me with his head sharing my big fluffy pillow. “Something has made you smile again. It’s the first I’ve seen since we left the restaurant,” Matt said as he smoothed back a curl from my cheek. “Does this mean you’ve abandoned plans to escape me?”
“What do you mean?” My heart and smile froze. How does he know?
“You’re now a part of me through our imprinting.”
Those quiet words spread more ice throughout my bones. He leaned over and claimed my lips. I wanted to draw away, but I couldn’t. When he pulled back long, breathless moments later, I forced myself to speak quickly before my treacherous body betrayed me again and my brain stopped working.
“You keep saying that—I don’t understand what you mean when you say we’re imprinted on each other, Matt. Please tell me—what are you talking about?”
“It’s a rare occurrence, doll. People are always rhapsodizing about waiting their entire lives to experience the one overwhelming heart affinity between two people. People on my world believe that whenever they find each other across life’s adversity and the webs of time and space, their souls enmesh and their thoughts bind each other. Imprinting is what we called it where I come from. My mother’s people said it goes beyond reason and emotion. It’s a reclaiming of a missing part of one’s soul.”
Matt gave me a gentle, wry smile, the mesmerizing sparks in his eyes’ center glowed. “And I thought I was only rescuing a fair maiden from entrapment today upon Harnaru. I never suspected Fate would contrive to bring me the missing part in my soul now, of all times.” His brows descended in a dark frown. “It doesn’t matter. I’ve claimed and married you, Kailiri Summers Lorins. And I’m holding on to you as long as I possibly can.” He said this last part in a determined, hard tone. His hand curved around my hip and forced my stomach in flush contact upon his.
Conflicting alarm mingling with a curious melting in my heart confused my emotions. His words sounded as if our marriage had been an unexpected interference in his life too. Something told me he hadn’t revealed everything about my imprinting. Would the full truth frighten me witless, if I knew?

Author Bio:
D. Martin likes science and finding out how things work. She was one of those annoying kids, who drove her mom and teachers nuts with continual questions of “Why?” Her career as science researcher gave her the opportunity to play in labs and create some pretty neat stuff—and maybe advance technology a little.

She believes a person can never have too many books. She reads everything, but is fond of science fiction, fantasy, and romance. World cultures fascinate her. She loves science fiction movies and once wanted to be an astronomer to find out what’s ‘out there’. She lives in the Midwest with her husband and daughter, who are both very understanding when she’s off the planet writing.