I'm happy to have fellow Evernight Author Beth D. Carter on my blog. Welcome Beth! Today, Beth is here to share about her latest release When Lightning Strikes.


Hello!  Thank you so much for having me on your site today!  When Lightning Strikes has been one of my favorite stories I’ve ever written (so far!).  It’s a time travel where the heroine comes forward to our time from 1794.  I did a lot of research for this story, as well as paying tribute to some of my own ancestors.

The heroine’s name is Henrietta Lydia Knapp and Knapp is a family name with a long history.  My sixth great-grandmother, Lydia Knapp, had a prestigious family tree, linked back to Katherine Cromwell, the Tudor line, and Charles VI (the Mad King of France), whose own lineage was deeply engraved on England and France’s bloody history.  Lydia Knapp’s grandfather came to Massachusetts in the 1600’s, making him one of the first people to settle the untamed new world.  Genealogy is truly amazing and humbling at the same time.

It was so interesting researching certain facts from Colonial America. One of the most interesting was The Flowing Hair dollar mentioned in When Lightning Strikes.  It was designed by Robert Scot and on January 24, 2013, a specimen striking from the 1794 production sold for $10,016,875, the highest price ever paid for a coin.  Wouldn’t that be a true pleasure to find in the attic! 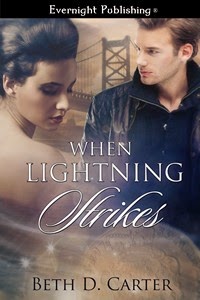 Blurb:
Micah John drifts through life relying on his ability to count cards in the seedy underbelly of Las Vegas.  One bad turn has him owing a hundred thousand to an unscrupulous loan shark, with only a week to come up with the cash.  He doesn’t have time for much of anything, except working and worrying.

He sure the hell doesn’t have time for a woman claiming to be from 1794.

Henrietta Knapp is trying to wrap her brain around the fact that she’s out of her time.  A bolt of lightning has brought her more than two hundred twenty years forward.  Why? She doesn’t know. Not until Micah John appears.

As mistrust and fear drain away, Micah John and Etta find a love that outshines the bad and the ugly.  But will they be given the chance to hold onto a happy ever after, or will the lightning strike again?


Excerpt:
He stopped in front of a popular clothing store. Mannequins modeled cute little outfits and Micah John looked expectantly at her.
“What do you think?”
She looked from him to the window and back again. “What do I think about what?”
“The clothes.” He liked the Capri pants and thought they would nicely show off her cute ass. Of course, he would never tell her that.
Her mouth dropped open a little. “You said my brain couldn’t wrap about the facts of technology, but truthfully I can’t understand how women can wear so little.”
He laughed. “This is nothing. You should go to The French Riviera where you can to go topless on some of the beaches.”
“You’re lying,” she accused.
Micah John shook his head and held up his right hand. “Scout’s honor.”
“Oh, my,” she said and looked back at the clothes being modeled. “Robert Burton wrote in his book The Anatomy of Melancholy, ‘When they are at Rome, they do there as they see done, puritans with puritans, papists with papists’.”
“Right,” he said. “We’ve shorted it to when in Rome, do as the Romans do.”
“I suppose that is a more succinct way of saying it.”
She looked around at all the women passing by. Shorts, miniskirts and tank tops, all exposing more skin that she’d probably ever seen. He almost felt sorry for her. “I’ve come out in public in just my dress, sans petticoats. I suppose I can acclimate to being a Twenty-first century woman.”
“Atta girl.”
He pulled her into the store.

About Beth:
I like writing about the very ordinary girl thrust into extraordinary circumstances, so my heroines will probably never be lawyers, doctors or corporate highrollers.  I try to write characters who aren't cookie cutters and push myself to write complicated situations that I have no idea how to resolve, forcing me to think outside the box.
I love writing characters who are real, complex and full of flaws, heroes and heroines who find redemption through love.

I love to hear from readers so I’ve made it really easy to find me on the web:
https://twitter.com/BethDCarter
https://www.facebook.com/bethdcarterauthor