I'm happy to have fellow Evernight author Jessica Coulter Smith on my blog. Welcome, Jessica! Jessica is here today to share with us her latest release, Resisting the Alpha.
*** 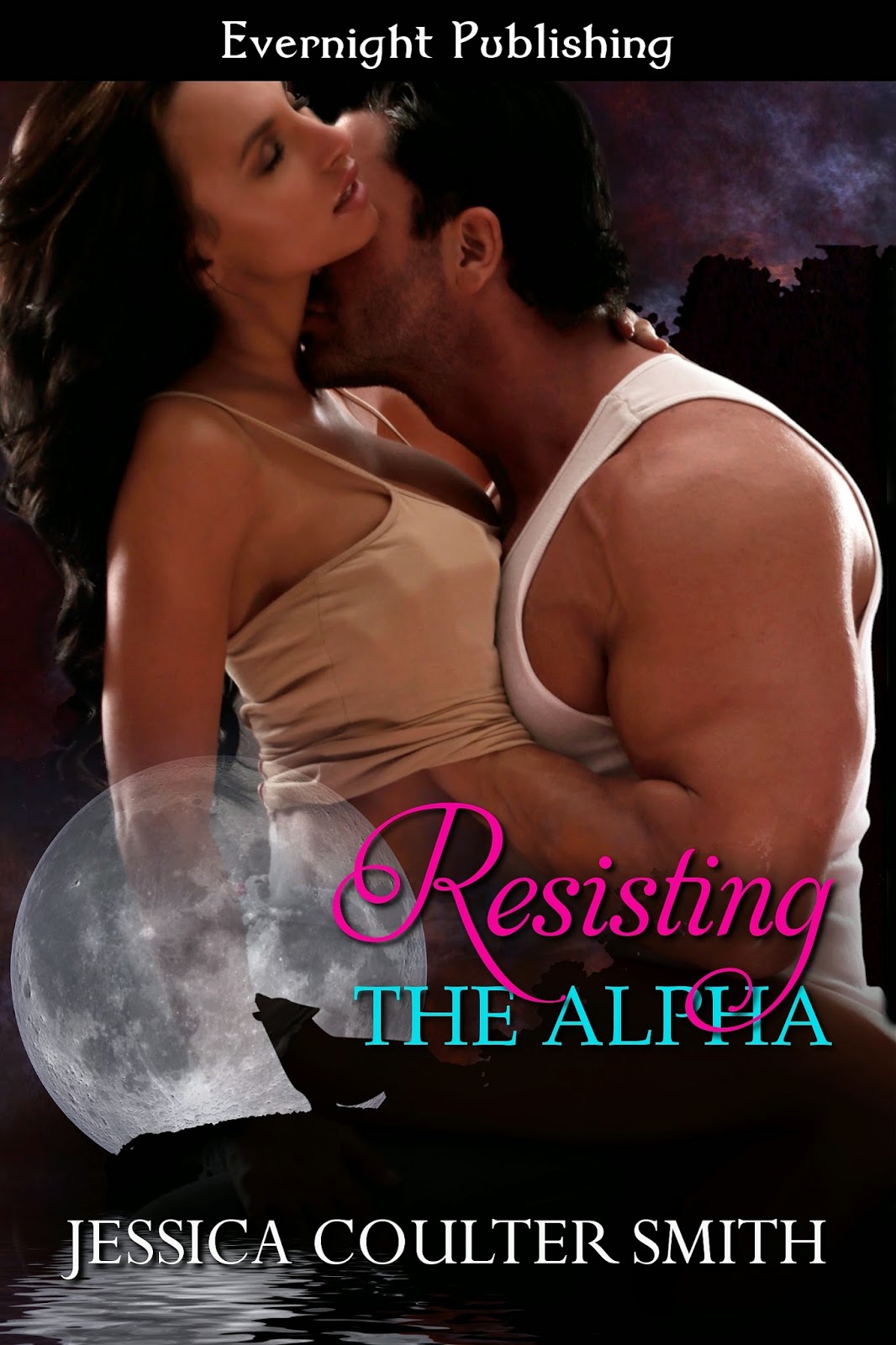 Blurb: Bridget Donohue is beyond furious with the meddling alpha of the local wolf pack. He not only crashed her wedding, but scared the groom away. And for what? It isn’t like he’s ready to man up and claim her.

Disgruntled by his attraction, Micah Smythe feels the pull but isn’t willing to bite. Bridget is irrational, mouthy, and temperamental. So why does his body respond every time she’s near? He’s declared her off limits, but the more time he spends with her, the harder it is to keep his hands to himself.

Passion ignites between them, but Bridget refuses to give in to the wolf’s game of seduction. She’s determined to resist the alpha at all costs.

Excerpt
Bridget tossed back another shot of whiskey, the amber liquid burning its way down her throat to warm her belly. It was her fifth one. Maybe. Truth be told, she’d lost count. Drinking wouldn’t solve her problems, but it sure did feel nice. She slammed the glass down on the bar top and motioned for the bartender to bring her another.
“You sure you want to do that?” Max asked.
Bridget eyed the sexy incubus and pursed her lips. “I wouldn’t ask for another one if I wasn’t sure I wanted it.”
“All right, but if you fall off that barstool, I’m not picking you up. Your ass can stay on the sticky floor.”
She snorted and motioned for him to hurry up and pour the drink. When he went to move away, she snatched the bottle out of his hand. Max just shook his head and moved on to his next customer. She watched him with a hungry gaze. If it weren’t for that whole soul-sucking thing, she might take him for a ride. Her bed was going to be damn lonely tonight. She’d gone home to change out of her wedding dress and found her fiancé’s half of the closet empty. Rat bastard hadn’t even left a note. He’d just bolted.
What a wimp, letting the likes of Micah Smythe get to him. Maybe the alpha had a point. She needed a man with a backbone, someone who would go toe-to-toe with her and not cower when she raised her voice, which she did rather frequently. She’d been told more than once she should try out a shifter, but they were always looking for their mates. That’s the last thing she wanted … that type of commitment literally meant forever. Shifters lived a damn long time, and once they bit their mates, their women would live just as long.
Bridget enjoyed life as much as the next person, but she wasn’t sure she wanted to spend several hundred years hanging around. Wouldn’t it get boring after a while? There was only so much travelling you could do, and only so many sights to see.
Someone settled on the stool next to her and she turned to look at her best friend. They couldn’t be more opposite, but somehow it worked for them. While Bridget was loud and never backed down from a fight, Josette was soft-spoken and calm in any given situation. Even when her pack attacked her, she handled it with grace. Of course, she never fought back, which Bridget just didn’t understand. No way would she ever be anyone’s punching bag.
“I don’t think the answer is in the bottom of that bottle,” Josette said as she flagged down Max.
The bartender approached with an easy smile for the young wolf, and Bridget wondered if there might be something there. It wasn’t the first time Max had lit up when Josette was around. And he definitely acted differently around her. He always turned on the charm with the ladies, true––but with Josette he spoke softly and was a little too sweet. Bridget wasn’t sure how that whole soul-sucking thing would work out between them, but obviously romance was in the air.
Too bad it wasn’t her romance. No, a certain obnoxious wolf had wrecked that for her.
“I’ll have my usual,” Josette told Max.
“One mudslide coming up, beautiful.” He winked and began gathering the ingredients.
Josette smiled at him before turning to Bridget. “Have you talked to Paul since he ran out of the church? If you could call that a run … I never realized someone’s arms could flap so much. For a minute there, I thought he would take flight.”
Bridget snickered. “Maybe he’s secretly a were-chicken. He damn near laid an egg when Micah growled at him.”
“The Alpha does have that effect on people.” Josette pursed her lips. “But then, that’s because they don’t really know him. There isn’t a sweeter man around.”
Bridget slid a glance toward Max. “I don’t know. There might be one.”
Josette stiffened. “Are you thinking of moving on so soon?”
“I wasn’t talking about for me.” Bridget rolled her eyes. “Don’t you know that man only has eyes for you? I swear he wears his heart on his sleeve every time you walk through the door.”