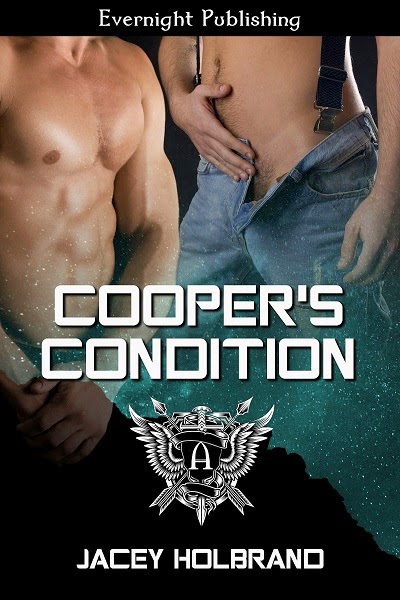 Thank you for having me on your blog! I’m happy to be here today to let readers know about my newest release, “Cooper’s Condition”, from my series, The Agency. This series follows a couple, Evan and Seth, and their friends and co-workers as they deal with aliens and the ramifications of their encounters. There’s intrigue, lots of hunky guys, hot sex and men getting knocked up.
Yep, you read that right.
Some men get pregnant.
But you’ll have to read the stories to find out who’s affected, how and what happens. ;) The stories can be read as standalones but for maximum reading enjoyment they should be read in order: “The Encounter”, “Breeding Seth”, “Cooper’s Condition”.

For now, here’s some information on “Cooper’s Condition”.

Blurb
Cooper Hanes has met the love of his life, Doctor Micha Levi, and the chemistry between them is instant and hot. Yet life takes a turn when they go on a fateful trip.
Alien abduction. Experimentation.
Cooper’s left to deal with the greatest challenge of the ordeal.
Being pregnant.
Can their lives and love survive the aftermath of the encounter and the changes that come with Cooper’s condition?

Excerpt
Micha’s expressions were so flirtatious and seductive, Cooper’s knees weakened for a moment, but he was able to gather his wits in spite of his raging libido causing him to go all moony eyed. He held out his hand. “I didn’t get a chance to introduce myself earlier. Cooper Hanes.”
“Micha Levi. Sorry I didn’t stick around to talk, but Doctor Lee and I don’t quite see eye to eye on certain issues, and we find it’s much easier to stay out of each other’s way.”
When the doctor shook his hand, a pinch of electricity bit into Cooper’s palm. The sexual magnetism he felt between them intensified. “No problem. Totally understand.”
“So, Cooper, are you new at the hospital?” Micha returned the dumbbells he’d been using to the rack. “How long have you known Doctor Lee?”
“I’m just there to consult on a couple of cases, help out the athletes who got a bit busted up and need some extra special TLC. Doctor Lee was one of my instructors in college so we go way back.” When he caught Micha wrinkling his nose, he added, “Professionally speaking, that is. I’ve only known him in the educational and work environments. For the most part I work out of the offices of Triumph Physical Therapy. I usually work out at the gym near there or the one near my apartment, but I didn’t feel like driving and losing my motivation along the way.” God, Cooper, stop babbling. He hated being nervous around other men. He needed to get the doctor talking. One, to shut himself up. Two, so he could listen to the slight accent the man had. “What about you? Been at the hospital long? Do you have a special focus in Orthopedics?”
“I do everything, but my interest really lies in adult spinal disorders and surgery of the spine. It’s delicate and intense work, but to see someone go from constant pain to minimal or no pain and have their quality of life improve is rewarding.”
“I get that. It’s wonderful to see the positive change in a person’s life when they heal.” A woman walked by and snagged the spot near the dumbbells, but a bench became available. “I want to do some presses. Willing to spot me?”
“Sure. Lead the way.”
Micha stood at the head of the bench and placed his hands out toward the bar but didn’t touch it. Cooper grasped the metal pole with fifty pounds worth of weight on either end and lifted it up and over the supports. As he executed a set of reps, he stared at the bulge in the front of Micha’s gym shorts.
The doctor’s cock… So close yet still so far away.
With a small sigh disguised in an exhale of exertion, he wondered how he would approach the subject of his and Micha’s sexual preferences, then mentally kicked himself. It wasn’t like this was his first go-round in the dating game. He had no idea why he was acting like a total noob.
Did the bulge in Micha’s shorts just get bigger?
Micha cleared his throat.
Cooper replaced the bar into the support section and gazed up at the man who was leaning forward and staring down at him.
“Mr. Hanes.” His mouth twisted upwards, not in a true smile but one he probably reserved for difficult patients in which he could silently say, I’m trying to be nice but you’re being irritating. Yet, there was an erotic naughtiness to the dark grin and shadow cast over his eyes. “Are you gay?” Micha’s low voice rolled with a beautiful Arabic tone.
He swallowed hard and made sure to meet Micha’s gaze full on. “Yes. You?”
“Yes.”
A sudden sense of calm and ease filled Cooper, replacing the anxiety and filling him with a burst of confidence. Emboldened, he decided to be direct and very honest, feeling if he were to have a relationship with a doctor, this would be the best tactic to use. “Good. When we’re done here, I want to take you out for a drink and make out with you.”
For an instant, Micha’s gaze sharpened, seemed to ignite with passionate heat. “Why wait?”