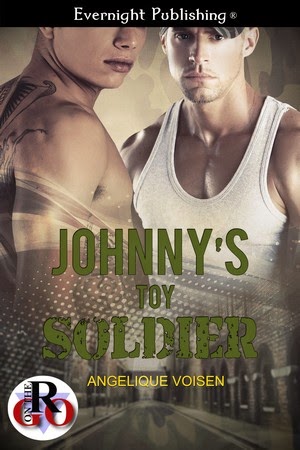 Blurb: Learning his older brother's unit came back one man short devastated Johnny Santiago beyond words. The only way he can deal with his grief is to blame Josh Miller, his brother’s best friend and lover—but how can Josh blame a broken soldier?

Josh’s pain cuts Johnny deep, and when he makes the hasty decision to comfort him, he didn’t know a single kiss could change everything.

Excerpt
“On a scale of one to ten, how horrible was it?” Josh asked, grabbing more popcorn.
One piece landed on his chest and I absent-mindedly picked it up. That was an error. My hand brushing his naked skin wasn’t just a colossal mistake. It felt like a sin. One mere touch is enough to send a jolt up my arm and right down to my dick. I told myself Josh wouldn’t notice how I reacted, but he did. Josh watched me intently, and I tried to pass off the moment by scooping up the bit and tossing it into my mouth.
“One being horrible or one being good?” I asked, noticing how he abruptly stood to pick up a fresh shirt from the drawer by the TV where he kept his clothes, despite sleeping in Eli’s room. I understood. I wanted to leave Eli’s belongings in tact too, at least for a while.
“What the hell are you doing? It’s not like I haven’t seen you without a damn shirt on.” The words left my mouth before I could take them back.
“You don’t need to see my…accident.” Josh pulled the plain white shirt quickly over his neck and a part of me—to be honest, a huge part—was sorry to see the expanse of his muscles covered up.
“Accident? Josh, I hadn’t even noticed until you mentioned it.”
“Stop it, Johnny. I fucking hate it when you take pity on me.”
“You think I pity you? Well, I don’t.” I crossed my arms. “Why can’t you see you’re fine just the way you are, even without one arm?”
“Stop lying. No one wants a one-armed broken soldier,” he said.
Striding over to him, I grabbed a handful of his shirt and glowered at him. “Sometimes, you can be so fucking stupid, Josh. Who the fuck do you suppose I think of when I go on these stupid dates?”
“Well, yeah. You have to worry about the cripple you left at home, scared he’s going to commit suicide or something.” Josh said, stepping back.
But I refused to let go of his shirt. He tightened his hand over mine, and my pulse leaped at the physical contact.
“Is that what you think?” I asked softly.
His expression turned to one of surprise, then realization, then shock.
“You aren’t a chore to me, Josh. You never were.”
He drew away first, as if my touch was a brand, a brand he was terrified of being burned by. By the way the bulge in his boxers grew, I knew what I felt wasn’t one-sided. Don’t get me wrong. I was terrified too, and equal parts ashamed of what I felt. By wanting Josh, I was betraying my brother. But my brother was dead. Was he floating in some version of heaven, or was his soul resting in some form of sweet oblivion? How could Eli leave, knowing he’d abandoned Josh and I, left us in turmoil?
“We can’t do this,” Josh whispered, agony evident in his eyes.
Feeling bold, reckless, drunk, hell, maybe all three, I took the leap like I did at the party. I kissed him again and felt him cave under my kiss. The heat between our bodies wasn’t imagined, because the room grew hotter. I deepened my kiss and suddenly felt his hand pressing me away, tearing my mouth away from his.
“We can’t,” he repeated, weakly at first, then more resolute. “We can’t, Johnny. This is wrong.”
“How are you certain it’s wrong? The way your body reacted tells me it’s not.”