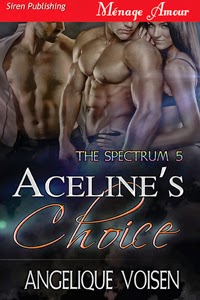 Blurb: There’s a rare magic amplifier in New Furor and everyone’s out to claim her.
After failing to capture one magic amplifier for his power-hungry family, Ethan Donovan and his partner, Griffin Terrel, are tasked with obtaining another. Every magic slinger in the city is out to get Aceline Dresden, and Ethan and Griffin have to act fast to stay ahead of the game.

Binding Aceline to them seems like the easiest solution. The more time they spend time with Aceline, though, the more they realize they want her for themselves.
Aceline was raised knowing her place in Spectrum society. After her owner’s death, she refuses to be under someone else’s leash again, but with a little girl to protect, her choices are limited. When Ethan and Griffin offer a temporary solution, she accepts it, but why does yielding to them seem the easiest, yet hardest thing in the world?


Story Excerpt
Aceline gave him a bitter smile. “Jeremy was decent. Besides, freedom’s just an illusion for my caste.”

Decent. It disturbed Griffin why she only used one adjective to describe her previous keeper. He’d never been interested in Familiars before and it shamed him. Like most Wielders, Griffin didn’t really see them as actual people. They were akin to exotic merchandise. Living batteries.

“Let’s quit playing games, Ethan. You said you and Griffin were tasked with acquiring me for someone else. I know the limitations of my choices. Who am I going to belong to?”

The casual and matter-of-fact-way she said those words roused the anger inside Griffin. She shouldn’t be offering her like that so easily to anyone. No one should offer themselves like that to anyone.

“For the moment, you belong to us. With us, I mean.” Ethan corrected at the last second, although Griffin suspected Aceline wouldn’t be able to tell the difference. “We might need to temporarily tie you to our magic so the other Wielders would know you’re taken and off-limits.”

“Understandable. What would my duties entail?”

“Fucking stop,” Griffin barked. He was no longer able to contain himself. She dropped her eyes at the command in his voice, which didn’t do much to calm his temper. “I’ve had enough of the way you speak.”

Defiance appeared in her remarkable eyes. “Once you’ve bound me, then you can command me to whatever you want. I can be your silent little toy if you wish. Until then, you have to endure the sound of my voice.”

Griffin approached her, but he approved she didn’t flee or back away. “That’s more like it. Aceline, you’re not anyone’s fucking slave.”

She met his gaze evenly. “Wielders like you piss me off the most, Griffin.”

Griffin closed the space between them until only inches separated their bodies. “Wielders like me? Please elaborate.”

“Yeah. Those who sprout shit like that and delight in playing mental games. I’m well aware of what I am and my function. You don’t have to worry. I serve and obey.”

Griffin wasn’t aware of his fist sailing through the air and punching the wall a few inches from Aceline’s face. It didn’t help that Aceline winced at the close contact. The pain in his hand helped him think more clearly. Griffin could feel Ethan hovering anxiously over his shoulder, but he wasn’t speaking yet. He was trusting Griffin to handle the situation.

Aceline fixed on him an unreadable look, and said in a biting tone, “Are you looking for a punching bag too?”

“No.” The sound of his instant and disgusted denial shocked him.

Griffin had never been good with words. He had always been better with actions, and he had to act now or Ethan and he would never rectify the situation. Aceline didn’t move when he gently lifted her chin. Those midnight eyes continued to pierce through him. To drown him.

Griffin’s lips caught hers, and when she didn’t resist him, he kissed her rough and deep. He took her in her taste like a starving man in the desert. The magic in his sapphire stone reached out for her with thoughtless abandon, as if it knew she rightfully belonged to him and Ethan. Her own red energy responded in turn. Griffin could almost smell her sharp need and the depth of her loneliness.

Decent was the word she’d used to describe her former keeper. If Griffin could add another adjective, it would be insufficient. Whoever he was, her former keeper didn’t know how to treat her right. To give her what she needed.

Just like that, she folded against him. He caught her slender frame, trying to contain his hands from moving, but they had a will of their own. They roamed, touched, and explored every line and curve, but it wasn’t enough. Griffin didn’t want to touch fabric. He wanted to feel flesh. Her flesh against his.

Someone was breathing deeply behind him, and he knew it was Ethan, experiencing the same emotions as he did because he also knew Aceline belonged to him as much as she belonged to him. To possess and claim such a woman was dizzying and overwhelming.

Aceline drew her mouth away to whisper. “What are you doing to me?”

Her strange eyes showed him bottomless, deep, and vulnerable wounds—wounds Griffin intended to mend, knit, and heal. He wanted them gone because he wanted to see her happy, to hear her laugh, and to show her how to live.

“I’m showing you how it’s going to be when you belong to Ethan and me.” Griffin caught her waist and easily lifted her as if she was child.


Adult Excerpt
“I’m going to fuck you against the front door, because I don’t think I can help myself.” Griffin growled, molding his hard body against her. She sighed against him, enjoying the familiar feel of his hands.

Aceline’s panties were already drenched, and her pussy was aching to be filled. True to his word, Griffin barely made it past the front door and began to undress her.

“Like it?” she asked. Ethan licked his lips as he turned a circle around her, settling behind her back.

Griffin hooked his fingers into the band of her underwear, which was only a patch of cloth barely covering her crotch and two strings, and nuzzled his head into the side of her neck.

“Very much,” Ethan said, biting down on her earlobe and plunging his hand past the waistband of her panties to finger her wet pussy lips.

Aceline could hardly think. She wanted more. Griffin pushed one cup of her bra aside, pulling on one of her nipples, making her arch her back against Ethan.

“Baby, do you think you’re ready to take both of us tonight?” Griffin asked before putting her hardening nipple into his mouth.

“Yes,” she felt herself answer, crying out when he began sucking on the hard peak while Ethan reached further to begin circling her clit.

“Good answer. This is what’s going to happen, kitten. Griffin wants to eat you out, and then I want you to ride my cock while he fucks from behind, yes?” Ethan caught her lips, deepening his kiss. Griffin took her other nipple and delivered the same attentions, while Ethan muffled her cries with his mouth.

Making his way lower, Griffin kissed his way down, pushing up the thin triangle of cloth to reach her sopping pussy. Ethan’s fingers retreated and began playing with the puckered flesh of her asshole while he continued to devour her mouth.

Griffin took his time, sucking down on her clit and making her entire body tremble before dragging his tongue downward to tongue-fuck her. Ethan’s solid frame held her as Griffin brought her body to orgasm.

“Come for us, Aceline,” Ethan said, parting from her lips. “Come all over Griffin’s mouth, baby.”

She leaned back against him as waves of pleasure assaulted her body. When she came to, Griffin had undressed and Ethan had passed her over to him so he could undress as well.

“Thank you,” Aceline told Griffin, running her fingers down his hard chest to his tight abs. He took her fingers, kissing them.

“Let me return the favor.” Aceline knelt in front of him, and curling one hand over his base, she began to lick him.

He groaned, sinking his fingers into her hair. “Aceline, I don’t think I can last.”

“Gods of Furor,” Griffin murmured above her, beginning to pull out. His eyes were intent and bright. “I want to come in you, Aceline.”

“Okay,” she agreed, glancing at Ethan and his erect shaft. “And I want to ride you.”

Grinning, Ethan nodded to the bedroom. They retreated to the bedroom, and once Ethan was lying flat on his back, she felt Ethan tugging impatiently at the straps of her soaked underwear.

“This pair lasted much longer than the others.” Once the panties were off, he took off her bra. “I think these are going to be my favorite. Pink and black looks so hot on you, baby.”

“You think?” Aceline straddled him, sinking slowly over his member.

“You feel good, baby,” Ethan murmured, hands going around her waist. A drawer was shut somewhere, and Aceline remembered Griffin said he was getting some lube. She had trouble thinking, especially when Ethan was thickening inside her, filling her completely.

“You’re not bad yourself,” Aceline confessed, and began to move, moaning at the sensation of Ethan inside her.

“Lean over Ethan slowly,” Griffin said, bringing her back to reality. Aceline drew out of Ethan slowly, leaning against his chest, thrusting her hips up for Griffin.