Guest Post: In Search of the DNA of Romance by Chantal Verlaine

Today, I'm happy to have Author Chantal Verlaine on my blog. Welcome, Chantal! Chantal is here today to talk about the DNA of Romance and her book Miami Steam, which is currently on sale over at Amazon.


In Search of the DNA of Romance Fiction
By Chantal Verlaine

Why are we so hooked on romance? I’ve often pondered this conundrum. Before we even crack open the cover of a romance novel, we know the plot setup, who the main characters are going to be, and of course, the ending is a given, yet we still keep turning the pages and buying romance more than any other type of fiction. The enduring attraction to love stories defies logic, but I guess that’s the point - it’s not rational, it’s emotional, something akin to the Movie Kleenex Syndrome. I don’t know about you, but when a movie makes me cry, I usually come out of the theater saying what a great movie it was.

Still, what is it specifically about romance novels that makes our hearts go rat-tat-tat? I figured if I wanted to answer that question I would start by looking at who exactly reads romance. No surprise here. According to the Romance Writers of America, 91 percent of readers are female. Some other interesting factoids – about half of romance readers are married, most are middle-class, aged 30 to 54, and nearly 40 percent in the South. In other words, we are kind of average. Hmm, okay, so we’re looking to escape our humdrum lives, but there’s tons of ways to do that. I still wasn’t getting to the nut inside the romance shell.

I took a closer look at romance novel covers, at those hunky handsome studs who most of us will never get to date, who never would’ve given us average gals a second look. But there’s something more than their looks – they are alpha males, symbols of masculine virility, so testosterone-tough inside and outside that they are unattainable.

Since high school, I have been attracted to these types – the bad boys, the rebels with a devil-may-care swagger. They straddled chairs turned backwards and held their cigarettes between a thumb and two fingers. They drove muscle cars with engines that gave off throaty rumbles. They were cute, they were cool, and they totally ignored me. What I would’ve given to have had a bad boy fall in love with me!

Flash forward a couple years (okay, way more than a couple), and I did manage to land a few bad boys along the way. Problem is bad boys make bad boyfriends. The fantasy doesn’t quite hold up.

But in romance novels, it does. The heroine attains the unattainable bad boy, albeit after a bit of a struggle – we do have to have some plot twists and turns. But she wins his heart, she gets her man! And boy, does she get him – she reels him in and strings him up like a two-hundred pound marlin at the Key West dock. He is totally, devotedly hers because we all know that when Bad Boy gives his heart, it will be true and forever. Bad boys may have lots of belt-notches, but not being sentimentally squishy, they have room only to love one woman.

We want to be the one who succeeds in penetrating the Teflon male’s heart, a feat that countless other women have fruitlessly tried to pull off. And we all want that Romeo-and-Juliet kind of adoration, to be loved utterly and completely, simply for the virtue of being who we are. An idealized version of love, to be sure, but immensely gratifying to us women. Let’s face it, even today, we have lower self-esteem than men. Taming men who still dominate and control the reins of power in our society is a boost to our collective ego.

Aha! That was it! I felt I was striking the right chord, but I was still missing a note. What about the female protagonist? She obviously plays a key role. Who is the woman who attains the unattainable?

Our heroines, I noticed, are both smart and sexy. They successfully reconcile society’s mixed messages about women. Attractive women are not taken as seriously in the professional world. Intelligent women, on the other hand, are not seen as sexy. To land a mate, we have to be provocative, to succeed in a career, we have to be almost gender-neutral. It often seems we have to choose between one persona or the other. In romance novels, femininity encompasses both beauty and brains. We want both – and as it happens, Bad Boy wants both. It’s a combination so seductive, so irresistible, that he pursues the heroine relentlessly.

My bottom line conclusion –romance fiction is really about female empowerment. It’s about women getting what they want (Bad Boy), being allowed to be who they are (smart and sexy), and boosting their self-esteem with unconditional acceptance (true love). That’s why we read romance.

Now, why exactly do we love bad boys? I’ll have to chew on that one.

Blurb for Miami Steam (Now half-price on Amazon, only $1.99):
Miami Star reporter Rebecca Challenger desperately needs a big story on the serial killer terrorizing the city in order to get a promotion to features writer. Her main source, lead homicide detective Rick Gonzalez, despises reporters. As the pair spar over the story, they’re both jolted by a white-hot current of mutual attraction. They overcome their mistrust to start a promising love affair, but overheard gossip causes Rebecca to shy away. Baffled and hurt by Rebecca’s sudden rejection, Rick vows to forget her. That is, until the serial killer, enraged by Rebecca’s story about him, kidnaps her, and Rick must rescue the woman of his dreams. Can true love endure in the face of misunderstandings and a psychopath’s wiles? 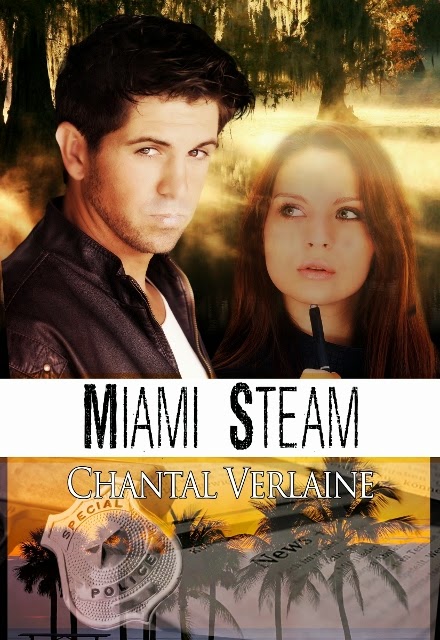