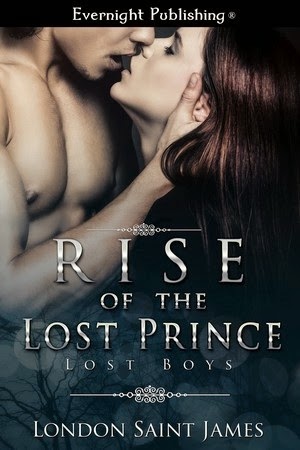 Blurb
They fight to protect those who would never welcome them into the human world...
Petúr always knew he and his brothers-in-arms were different. Something more. Something not human. Yet, he never expected to find out the truth of their origins, nor fall for a human woman whose father was set to destroy Neverland.
Ever since she was a child, Wyndi dreamed of an angel with eyes of the purest gold, although she never really believed such a man existed until she met the hauntingly beautiful Petúr of the lost boys.
With a prophecy to fulfill, a woman to protect, a portal to find, and evil darklings out for blood, will Petúr be strong enough to rise up and claim what’s rightfully his, or lose everything to a long-time nemesis, Grapple the Dark?

Excerpt
Petúr’s long coat flared out behind him, whipping in the wind—black raven wings. Above him, the moon danced in and out of existence and periodically hid behind the dreary clouds. He’d perched himself atop the rusted metal monstrosity which sat cold and derelict among the ruins of the abandoned seaside amusement park. From the top of the lifeless Ferris wheel he surveyed his realm, just as he did every night, waiting for the faint cries. They always came, those haunting cries, and called him and the lost boys into the darkness.

Cables clacked and Petúr tilted his head in a bird-like gesture, listening to them echo into the rhythmic music of the tide coming ashore. As if on cue, an eerie underlying chorus chimed in from the direction of the closed ticket booth. He recognized the sound of the warped roof when it moaned and creaked. The red painted exterior walls had long since faded and peeled away from the briny wood in elongated streaks, reminiscent of morbid tears.

He closed his eyes and attempted to picture this place he and the others called home, trying to imagine what it must have been during its glory days, but he couldn’t see anything. All he knew was the truth of his surroundings. And, the truth was, with every passing year more of his home crumbled. Even the entrance into this collapsing kingdom had joined the sea, snuffing out the arched sign which once upon a time blinked—Neverland—Mother Nature’s way of taking back her own when she’d claimed a major portion of the boardwalk.

At least this parcel of land had done one thing. It gave Petúr and the others refuge from a world who’d discarded them as young boys.

He chuckled, darkly, and allowed his mind to wander away from the image of being a boy. He, Firefox, and his five other brothers may still exhibit the outward beauty of youthfulness, yet this was nothing but a façade. They’d grown into fierce warriors and protected the very people who’d spat upon them in their youth. Who would still spit upon them if they got the chance, he suspected.

Shaking his head, Petúr considered what he’d heard the whole of his life may indeed be true. He and the others may well be mad, because only madmen would fight to protect those who would never welcome them fully into the human world they’d had the misfortune of being a part of.

Balling his fists into tight knots, he knew it didn’t matter how many lives he and the others saved. They were still different from those whom they rescued. And, while they may no longer be petty thieves and beggars, they’d always been, and still were—outcasts. Unnatural. Freaks. Something more. Something not human. Although, there wasn’t a damn thing they could do about it, other than to take out their fury on those darklings who sought to destroy the weaker inhabitants of the human race. And take out their fury—they would.

Petúr abruptly stood when he heard a woman’s distressed scream. He took in a deep breath, tasting the flavor of the night. His lip curled up into a snarl right before he stepped off of his perch, shot into the clouds, and vanished into thin air.

LSJ Bio and Social Links
London Saint James has lived in many places, but never felt “at home” until she met the real-life man of her dreams and settled down in the beautiful Smoky Mountains of Tennessee. London lives with her husband and their fat cat who thinks he owns them.
As an award-winning, bestselling, multi-published author, London is living her childhood dream. She knew all the scribbling she did, that big imagination of hers, and all those clamoring characters running around in her head would pay off someday.

You can also e-mail London with any questions or comments at London@londonsaintjames.com. She loves to hear from her readers.
Would you like to know more? Join her mailing list for her monthly newsletter http://eepurl.com/6P2on. Or, join her book group on Facebook, Slip Between the Pages with London https://www.facebook.com/groups/SlipBetweenthePageswithLondon/