Welcome to the 72nd week of My Sexy Saturday.
This week’s theme is A Sexy Morning. Don’t you just love it when you see characters have a snuggle down day that starts with an awesome morning? This week I’m posting a 7-paragraph snippet of Luring the Vagrant’s Heart, my upcoming ménage paranormal romance from Siren Publishing under my new pen name.

In this scene, Lars, a lone wereleopard, wakes up to a hearty breakfast after agreeing to a wild night with Cas and Des, two wereleopards he’d just met the night before.


Teaser
“Good morning. I’m glad the clothes fit you. They were Gerald’s.”

Lars assumed that was the name of her old king, so he only nodded. He couldn’t detect any sort of emotion behind those words, just a little hint of worry. Was she worried he’d been offended? 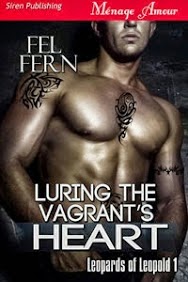 He watched her hesitantly approach him. She wore an old t-shirt, a pair of denim cut-offs, and her curls were tied up into a neat ponytail. Even so, she looked and smelled good, just as he remembered. When she was near his reach, he only grabbed a handful of her shirt and pulled her to him for a kiss.

Infused with the addictive scent of her, Lars’s hands possessively found their way across her body. He kept one hand on her waist, while the other skimmed the graceful length of her spine. She shivered against him, while he kept his mouth locked on hers. Her heat enveloped him, and he prodded his tongue deeper so he could taste her better.

Her cheeks were slightly pink, but she smiled back at him.

Blurb: Casey Hart and Desmond James are desperate cats on the prowl. The death of their old king and lover didn’t just fracture both their hearts, but also their pard. Leopard pards don’t function like wolf packs. The king, queen and their consort operate as a triumvirate. The arrival of Lars Marsden, a powerful, inked and biker rogue panther is just the answer to their prayers.

A road vagrant who refuses to be tamed, Lars wants nothing to do with the alluring leopard queen and her cunning consort. They don’t just want to seat him on an empty throne, they’re also deadset on conquering his heart. Cas and Des’s confidence in him stumps Lars, and he’s petrified of failing them. Can a solitary cat shoulder the responsibilites of leadership, and make room in his heart not just for two, but an entire pard?

Available for pre-order at BookStrand: http://www.bookstrand.com/luring-the-vagrants-heart. Out on 18th December 2014.