Welcome to the 70th week of My Sexy Saturday.
This week’s theme is Sexy Down the Avenue. We’re sure you’re wondering just what we mean by this. When picking themes for the rest of the year, we realized that we hadn’t picked anything historical in a while.

This week, I’m posting a 7-paragraph snippet of Defective Desires, my M/M steampunk paranormal romance from Liquid Silver Books. In this scene, unlikely defective werewolf and vampire, Biff and Cod, are about to plunge into their deaths into the scenic city of the Cogworks, a mechanical city floating city.


Teaser
“Cod,” Biff said through gritted teeth. “Understand that I can’t do this alone. After I count to three, we jump together. Trust me, okay?” 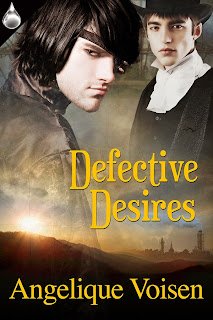 Cod didn’t understand. He didn’t even want to try to understand the logic behind the madman’s words, but the words ‘trust me’ startled him. Those were exactly the kind of words a weak vampire had to be wary of.

He learned long ago not to trust anyone in a city kept afloat by a series of enormous steam engines and filled with falling dirigibles. Cod certainly couldn’t afford to give away his trust in a city packed with all flavors of supernatural nasties eager to erase his existence simply for being weak.

Unexpected warmth filled him when Biff said those words. Although he didn’t understand it fully, he knew Biff would keep his word. Even if they both died from this ridiculous venture, at least Biff would die trying to keep both of them alive.

Not trusting himself to speak, Cod nodded weakly. Why was it so easy to trust this mortal?
“Okay. One...”


Cod gulped. The world blurred around them. The dirigible just passed one of the numerous bronze spirals of the Ministry buildings. Beneath them--hell, just what the hell was beneath them?

Blurb
Anemic vampire Codrick Conell Cornelius didn’t know that a blind date would lead to a near-death experience from a burning dirigible. If the fall doesn’t kill his near-human body, the gorgeous Biff Buffington will.

Cod has endured centuries of humiliation being the last vampire of his cursed line. When he finds out the local supernatural community wants him dead, he has nowhere else to go. When Biff offers him an unlikely alliance, Cod is terrified of trusting a man who’s able to turn his knees into jelly and set his heart ablaze.

A werewolf that’s unable to shift doesn’t amount to much in any wolf pack. Abandoned and left to fend for himself, Biff figures that when life hurls lemons at him, he’ll make lemonade. Making a living hunting down rogue supernaturals has more than its share of benefits and enemies. When Biff’s betrayed by his bosses, the last person he’d expect to help him is an anemic vampire. He wants this fiasco done and over with, but his wolf stubbornly believes Cod is his fated mate.

When a prophecy threatens to shake the very foundations of the supernatural community in the Cogworks, can two supernatural defects put aside their confusing feelings for each other in order to stay alive?