Welcome to the 61st week of My Sexy Saturday.
The theme this week is all about getting your sexy on…no matter what your age. We’ve talked over and over again that everyone has their own idea of sexy. What is sexy to one person won’t necessarily be sexy to another. Yet, getting one’s sexy on is a driving theme no matter what the age of the character, no matter what situation they are in, be it life or death. You know as an author what we’re talking about. These are the characters who are ageless and always seem to be getting their sexy on. They can be a farmer’s daughter or the farmer, they can be a doctor’s wife or the doctor, they can even be a billionaire or his wonderful assistant. 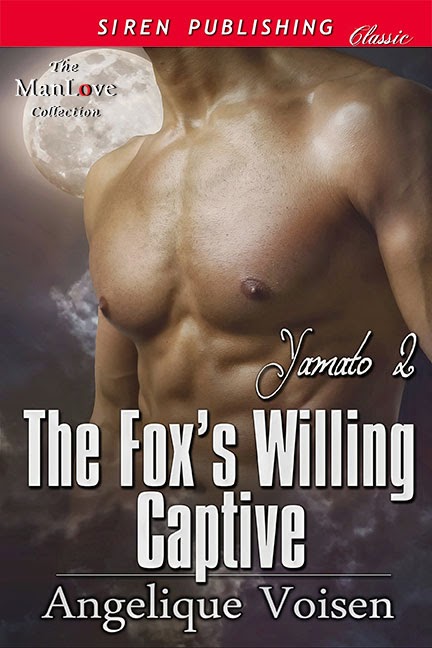 This week, I’m posting a 7-sentence snippet of my upcoming m/m paranormal romance, The Fox’s Willing Captive (Yamato, #2) from Siren Publishing. In this scene Prince Mori meets the supernatural nine-tailed fox who kidnapped his soon-to-be bride, and he inappropriately reacts to the situation.

Teaser
Fur disappeared like water, revealing long limbs, a well-defined slender but firm body, and a mesmerizing face with slashing cheekbones and sharp, cruel green eyes. Long white-gold hair framed the creature’s face and just looking at the fine and delicious lines of the man’s body tightened things inside Mori.

His cock embarrassingly sprung up under his trousers. The other man’s outwardly and unmistakably masculine beauty didn’t just call to him. In lured him in unexpected ways and dug into him like hooks. It didn’t help that the fox similarly appraised him just as Mori assessed him. When Mori’s eyes reached the man’s impressive meaty and hardening length, the fox smiled.

Blurb
The crown prince of Yamato doesn’t have it easy. What Mori’s got, he’s earned thrice over. His whoring days come to an end when he becomes engaged to a woman he doesn’t love. When his fiancée mysteriously vanishes in a forest ruled by a malevolent nine-tail fox, it’s up to Mori to save her. Obligation requires him to save his woman, but how can Mori outwit an opponent when he’s turning from a reluctant captive to a willing one?

Kurama is sick of toying with mortals. No one has sparked his interest for centuries until he sees Mori. Both he and his fox don’t just want Mori as a toy. They want to keep him as their mate. While he suspects holding Mori’s fiancée hostage isn’t the best solution, it’s the only one he has.

Can an old fox learn new tricks before time runs out?

Remember to visit the other authors in the hop: