Welcome to the 59th week of My Sexy Saturday.
Remember the movie ‘He’s Not That Into You’? Well, this is the opposite of that movie. There the heroine actually had to fight her way to get her man but the biggest obstacle was the man himself. How about the characters that are over the top about each other, regardless of the situation? The ones who can never keep their hands off one another. The ones you know will be that little old couple you see at the park, still holding hands after 50 years. It’s those couples we are talking about this week. 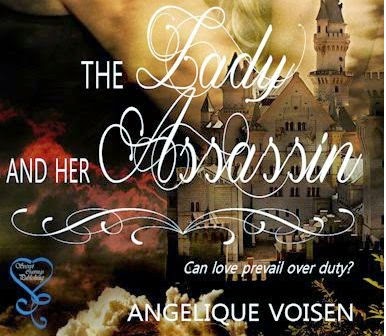 This week I'm posting a 7-sentence snippet of my romance fantasy short story, The Lady and Her Assassin from Secret Cravings Publishing. In this scene, Ray, the assassin, is hiding in a tree, watching the target she hasn’t realized she’s fallen in love with.

Teaser
I know her better than most of the twittering sparrows always by her ear.

The blind assassin shifted her feet to a more comfortable position on the tree branch she perched on. The leaves and thick branches barely made a sound at the movement. The conversation of the young noblewomen beneath her continued, their voices rising and falling like the sound of chuckling hens.

Ray didn’t concern herself with the sound of unfamiliar voices. She was tasked with familiarizing herself with the voice of one particular young woman and all the sounds associated with her. After nearly a month of crouching on dusty and cramped rooftops and in corners, Ray knew Lady Valerie Sinclair even better than the lady knew herself.

Ray comes from an elite order of blind assassins. Emotions don’t touch her and only profit moves her. Her current assignment seems simple enough. For a generous bounty, all she has to do is kill an influential noblewoman, except Lady Valerie Sinclair is more than she seems.

Killing always came easy to Ray, so why does she keep delaying her task?

Val is a young widow from a noble family who needs to re-marry. She’s always been an obedient daughter to her father and a loyal wife to her first husband, but Val doesn’t want to go through the ordeal of being tied to a man she doesn’t love a second time. It doesn’t help she has a sneaking suspicion she’s being stalked by an assassin.

Val is used to being surrounded by unseen enemies out for her blood. Could death's untimely arrival be just what she needs?

Don't forget to visit the other authors in this hop:
Labels: bloghop, my sexy saturday
Newer Post Older Post