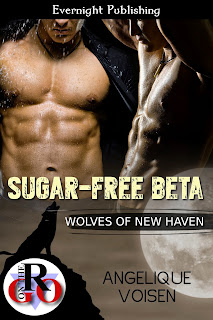 Blurb: Derrick Starr is a sad excuse of a dominant werewolf. Unlike most werewolves, he’s sworn off meat and has an abnormal preference for sweets. He’s also in bad state. His lover just left him and he’s just learned that he has type-two diabetes. An unexpected act of kindness triggers his meeting with Jack, a submissive wolf on the run from his abusive Alpha.

Reviews: Portia from MM Good Book Reviews says: This is the start to an awesome new series...It caught my attention from the moment I started reading it and kept it all the way to the end.

Christy from Rainbow Book Reviews says: ".... the author did a fairly decent job fleshing out the characters and the plot in such a limited number of pages. Overall, I enjoyed it."


Excerpt
“Just shut up and let me examine the wound,” Derrick demanded, sitting by the bed. It only got on his nerves the way Jack looked smugly at him when he cleaned away the dried blood. The wound wasn’t just healing. It was fully and completely healed. Only a shiny pink scar remained.

“I’ve heard of that, but I’ve never actually seen it,” Derrick murmured.

“So can we continue, or do you have another excuse?” Jack demanded.

Derrick had a mind to say something witty, but the Gamma slid one hand at the back of Derrick’s neck and leaned forward to kiss him again. His other hand rested on Derrick’s chest. Warmth exploded inside Derrick’s mouth, making him pull Jack towards him. The Gamma didn’t protest. He only leaned closer, his skin rubbing against him.

The need to touch his mate enveloped him. Their bodies needed to touch and kiss, to caress and torment, and to know every single inch of each other. It eluded Derrick suddenly, why he’d been such a fool. How did he live this long, without knowing the touch of his fated mate?

Derrick could feel the Gamma’s wolf, contained inside his lovely lean body. Jack’s wolf happily rubbed against his own wolf, and the great red only rumbled its growing approval. The Gamma’s pert hands wandered, tweaking one of his nipples until it was hard. Derrick moaned, but it was silenced by Jack’s persistent mouth. Jack’s hand wandered with deliberate slowness down his chest and his belly, until it curved around his growing hardness.

Jack didn’t answer him. The Gamma only pressed his lips against his, his hand busy at work. Jack stroked, fondled, and caressed his cock until it was nearly hard and ready.