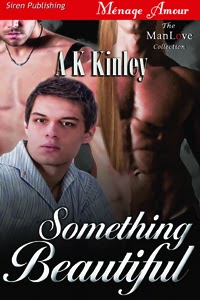 Transman, Reed Collins and his partner, Levon Kruger, an openly gay drummer for the heavy metal band Hardcore, have been in a committed relationship for eight months. The couple is continuing to explore the love and passion that began in an online chat program a year ago. Recently, they further defined that commitment as a marriage.

While on their honeymoon, Avery Gaines walks into their lives in what he calls, “a chance meeting.” The couple is immediately attracted to the tall, dark-haired stranger, with deep green eyes. Reed is the first to admit his love for Avery, but Levon holds his emotions in check. Avery wants the trio to share love and a commitment, not readily understanding Levon’s reservations.

The romantic triangle goes through a period of conflict and turmoil, until Levon finally reveals a promise that he made to Reed, and how loving Avery would call into question the very foundation of the marriage he shares with his partner.

Story Excerpt
Watching as Levon moved towards the front desk, Reed’s eyes became fixated on a sketch that stood alone in the corner. Unlike all of the other framed drawings, this one rested on a golden easel. Breathtaking. Smiling at his thought, Reed moved closer to the image of what looked like three pairs of hands intimately twined. There weren’t any faces, just arms that seemed to appear from the edges of the paper. Reed felt himself flush, when he realized that the three pairs of hands were masculine. Amazing detail. Such tenderness. Moving his hand towards the glass of the frame, Reed ran his fingers across the image.

“That sketch is one of my favorites. However, it’s not for sale.”

Hearing a smooth mellow voice next to his ear, Reed turned to stare into deep green eyes. Mesmerizing. Feeling himself blush again, he quickly looked back at the drawing, trying to rid his mind of the thought. Hating the fire he felt in his cheeks, Reed knew this time it wasn’t from the entwined hands.

The man standing behind him was at least as tall as Levon, maybe an inch or so taller. He had straight, dark brown hair, cut in a shag, which fell almost to his shoulders. A few bangs hung on his forehead, stopping right at the top of his eyebrows. The haircut perfectly framed the angles of his face. To add to the effect, he was wearing a pair of black slacks with a forest-green dress shirt. The combination only further highlighted those mesmerizing eyes. Feeling a twinge of guilt for the romantic attraction he felt, Reed was thankful when Levon returned from the front desk, draping an arm around his waist.

“Is this man bothering you?” Levon asked, as Reed felt him hook a few fingers through the belt loops of his pants.

Before Reed had a chance to reply, the stranger spoke, looking at Levon, “I’m sorry, I didn’t introduce myself to your partner.”

Reed watched Levon decline the hand that was offered to him. Instead, Avery crossed his arms across his chest.

“Mr. Gaines, are you aware of who I am?” Levon asked, tightening his grip around Reed’s body.

“Yes, you’re Levon Kruger, drummer for the heavy metal band Hardcore, and this is your husband, Reed Collins. I have fairly eclectic tastes in the arts, and one of those is rock music. Besides, both of your faces have been plastered on a few tabloids in the last week or so with rumors that you have quit Hardcore.”

“Then you know that I’m a transman?” Reed cut in.

“I know you’re a very handsome gay male, if that’s what you mean?” Avery responded, as Reed caught his gaze once more. “Levon, you are quite lucky.”

“I know Reed belongs to you, and likewise. I see the love that you both share, and I’m not trying to come between that, nor would I ever. I was not flirting, merely stating a fact. Levon, if you weren’t so worried about establishing your relationship to your husband with me, then you would have noticed my eyes subtly expressing that fact about you as well.”

“Okay, stop it!” Reed cut in. “What’s wrong with you, Levon, and frankly you too, Avery? I’m assuming that I can call you that, Mr. Gaines, after this episode. My husband and I came here to thank you for buying our meal this morning, and to find out the reason.”

“To be quite honest, I am surprised that both of you are here. Whose idea was that?” Avery asked.
Reed stood quietly, watching as the artist looked directly at Levon’s face.

“The idea was mine,” Levon replied, staring at Reed instead.

“I like to be careful when it comes to who I have contact with, particularly now, since I am responsible for more than just myself.”

“I haven’t been completely truthful. While I didn’t know whether or not I would see the two of you again, I was hoping that I would. That’s why I left my card with the waitress. I bought your meal because it’s not every day that someone sees two men so openly in love, and outwardly expressing those same feelings. I think your husband has already figured out that I am gay, based on his interpretation of my sketch.”

“I didn’t make any type of interpretation.”

“Yes you did,” Avery replied. “I saw the expression in your eyes, and your fingertips tracing the image beneath the glass.”

“I told you to quite flirting with Reed! That’s the last time I will tell you! The next time my fist will make the point!”

“I don’t believe you really want to do that. My day job as a forensic and police sketch artist requires me to be acutely aware of the human body. As part of my training, I studied facial expressions, mannerisms, in additional to the anatomy and physiology of the human body. The body language from you speaks otherwise.”

Stepping between the pair, Reed realized that both men were oblivious to his presence, as he watched his husband’s gaze lock with Avery’s eyes.

“The other reason I paid for your breakfast was because I felt an instant attraction to both of you, not just Reed, as you so wrongly perceived. Now, before that statement is misconstrued into something cheap and ugly, I am not in the habit of paying for other men’s breakfast in the hopes of returning them to my studio for a quick seduction! In fact this is the first time I have done anything like this.”

Avery finally released his legs from his forearms, wrapping them instead around his waist.

“I love you, too, Avery,” Reed finally replied.

“Sweetness, I love you…damn, how I love you.” Avery groaned. “I’m all the way inside you, sweetheart.”

Reed released Levon’s mouth. For just a moment, he lost himself in the touch of the man with the mesmerizing green eyes. His hands tangled in Avery’s hair as their lips moved in sweet passion against each other’s mouth. Next Reed’s hands began to explore the artists’ back, moving quickly to his buttocks. He was matching each of Avery’s gentle trusts with rocking movements of his own.

“Don’t make me come inside you, Reed,” Avery said. “I’ve still got to bond with Levon.”

Reed protested when Avery withdrew his dick. The artist now had his husband beneath his body, as Reed saw the passion unfolding between the pair.

Reed was so close to release. His groin ached and he felt his cock throbbing. Seeing Avery and Levon’s passionate kissing only fueled his fire.

At Avery’s command, Reed’s mouth went flush with Levon’s body, as he took his husband’s entire length into his mouth.

“I love you, sexy, so much,” Avery murmured against Levon’s lips.

“Honey, I love you, too,” Levon replied.

Hearing their whispered words of love flooded Reed’s heart with a passion unlike any he had ever experienced before. Levon’s cock was filling his mouth full of pre-cum, as he used his tongue to slowly lick the shaft from its base upwards to his husband’s swollen cockhead.

“Do you want me inside you, sexy?” Avery asked.

Reed watched as the artist gently brushed strands of damp hair away from Levon’s face. When Levon nodded, Reed saw the artist reaching for the lube. As Avery gelled two of his fingers, he used his other hand to push Levon’s thighs wide open.

“Kiss your husband, Reed. Let him know we love him…that we care about his pleasure, too.”

Reed glanced down to see Avery’s lips moving slowly down his husband’s hard dick. Levon was groaning against his lips. Seeing and hearing his husband’s pleasure had Reed insane with desire.

Hearing Levon groan again, instead of finishing his sentence, Reed asked, “His tongue, what?”

“Gaines’s tongue feels so good inside my ass.”

Lying next to Levon on the bed, Reed spoke softly into his husband’s ear, “I love you, metal man. Let Avery make love to you, too.”

“I do understand, sexy, why you held your heart from me.”

Avery had secured Levon’s right arm above his head, as his other hand was gently cupping the drummer’s left hip.

Reed was kissing Levon’s neck, listening to the pleasurable sounds escaping his partner’s mouth. The sound burned desire through his body, as it made his release all the more urgent. Reed felt restless, almost desperate in a sense, to bond his heart to the commitment that the three of them were creating.

“Reed, get your strap-on,” Avery spoke tenderly. “We’re ready to make love as a ménage of love.”

“Good boy,” Avery replied, staring sensually into Reed’s eyes. “I’ve thought a great deal about tonight, and how I would be able to join three bodies at the same time. One of us has to be double penetrated. That man is going to be you, Levon. Reed and I will be inside you. Three bodies kissing, caressing, their groins pressed so tight. Three hearts forever bonding.”

“That’s right, sweetness, just the three of us.”

Feeling Avery’s hard dick stretching his husband’s flesh caused Reed to linger a bit longer than he should. However, Avery said nothing, as Reed continued to rub his fingers erotically against the connection. Finding the artist’s sac, Reed caressed the swollen nuts.

“Reed, are you turned on by the fact that I’m inside your husband?”

“Neither can I,” Levon groaned. “Thrust, Avery, dammit!”

Reed watched as Avery slowly ground his hips against Levon’s pelvis. The drummer’s hands were clutching the artist’s buttocks.

“Babe, I want you inside me, too! We need this commitment with him.”

“Sweetness, you heard our bottom boy…put your dick in his ass.”

Andrew is a gay transgender man, who lives with his partner, John Jericho, and family. When not writing expect to find him enjoying spending time with family, photography, eclectic tastes in music and the arts, and browsing the local library and art galleries.