With no GoT this week to soothe my Monday blues, I chose to blog about that controversial episode between Jaime and Cersei Lannister on the episode Breaker of Chains a few weeks back instead.

In short, for non-GoT fans, this scene received a hell of a backlash due to its rape scene. 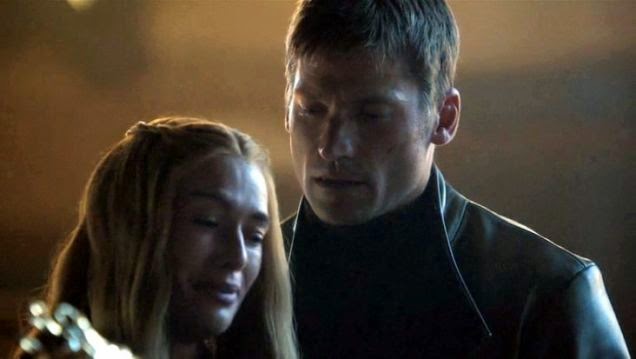 Sure, ignore the incest, or the fact that the two siblings did the deed front of their son’s grave, we fans focus on the non-consensual sex. Like all fanatics, we erupt into long discussions and debates on this particular scene.

But why place heat on this particular scene?

There are certainly more disturbing scenes. Take the implications of Margaery Terrel’s visit to Tommen in his bed in the middle of the night for one, but what is implied is different from the actual act itself.  Intent is harmless, actions are a different matter altogether.

Incest is one of the central conflicts constantly surrounding the Lannisters. In a way, incest is the trigger for the fight for the Iron Throne. Audiences (on both readers-first and watchers-first camps) can accept it for what it is because they’re used to after three seasons and several books later.

This scene though, was easily misinterpreted simply because of a few wrongly chosen elements like timing and dialogue. The scenes in the book simply weren’t successfully translated into screen the way it was initially intended, and thus sparked a series of “butterfly effects”. Effects that will cause shocks that can only be felt later on, but we’ll definitely feel it.

Still, the damage’s done. The episode’s  over and has managed to spawned long debates on the internet. Pretty soon, it’ll be forgotten when the next controversial scene comes up.

How do you decide the line between what’s sensually, but painfully delightful, to what’s downright disturbing?

We know there’s that general line for the general casual reader. We’re aware of the “incest, rape, paedophilia and bestiality” boundaries, but some books still dare to continually push at that invisible line. Push boundaries until the blurred edges and still find a particular audience for it.

Can you imagine the Manlove shifter craze ever catching on ten, maybe twenty years ago? Even the shifter sex in Laurell K. Hamilton’s Anita Blake series is dancing on the fine line between bestiality and ‘sex with a sentient being who happen to be able to change into an animal’ and Hamilton’s books are placed in the general fiction section in bookstores here.

Deciding where that line starts and end is a tough call, but for me, I believe that there will always be new and challenging ways to get the hearts of your audience pumping.